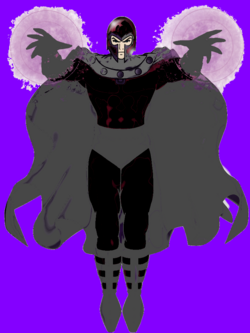 I've been told I'm one of the most powerful mutants on Earth. I've also been severely hindered by my past. I've considered asking Charles to wipe my mind before. But I'd never have gotten here if not for him or my past.

Erik Lehnsherr had always been misunderstood. He grew up always trying to get the attention of a girl he liked (named Magda). Despite this, his family was always downtrodden and treated like garbage. But when World War II struck, the Jewish Erik was in trouble. He was forced to help the Nazis kill people, something that Erik hated doing. But this death trap taught Erik that humans would always hate the minorities.

Soon he was able to escape the Nazis with Magda and settle down, taking the temporary name "Max Eisenhart" to live easily among her people. He married Magda soon after and had a child with her. He used his powers to threaten his boss when he was going to dock his pay, but when he returned home, his house was on fire, and his daughter was dead. Magda fled soon after, not revealing she was pregnant, and about a month later, she had twins Wanda and Pietro.

He soon worked for a time as a psychiatrist, helping people who struggled with Holocaust memories in particular. One day, he felt a compelling urge to visit Africa. There he was possessed by the Shadow King, and forced to do criminal activities. He gave him just enough consciousness to see what he was doing. Soon he stumbled upon Charles Xavier, who detected and removed the entity. They soon became great friends, revealing to each other their powers. But when they had the discussion on what to do with them, their views differed. Charles wanted to help mutants through peace, and Magneto wanted to wipe out humanity. They fought the likes of HYDRA, but after stealing some gold and betraying the Professor, he took a bullet from the sandy road and lodged it in his spine. Then he took off for parts unknown.

He ventured to the states after a time, and had a costume made for him of red and purple that would make him look better than other villains. He then tried to re-locate Charles, to find only that he owned a mansion in NY State. Then he ventured down to Cape Canaveral in Florida and took over their missile base to get his attention. The people who came, however, were not who Magneto was hoping for. He fought the X-Men, and then realized that the children belonged to Charles. Soon, he realized that if he could not defeat the X-Men alone, he'd need his own X-Men. So he recruited his children Wanda and Pietro, the lowlife Toad, and the ratty illusionist Mastermind. They set out to find the X-Men, and fought them, but when Cyclops tried to shoot his son, he missed, and accidentally killed himself, Pietro, Mastermind, and Charles' girl Jean Grey. He survived in a magnetic bubble, despite being at the center of the explosion. Magneto was not prepared for the loss, so when Charles suggested a merger again, he agreed.

Magneto was allowed to be a commander of the X-Men, but he still felt bad for paralyzing Charles. So he was able to create new coverings for Cerebro's legs. They allowed him to walk again, and they had jet boosters allowing him to fly. This restored their friendship to exactly what it had been before Erik's betrayal, which made them both happy. Magneto even organized his own squad called the Acolytes to help out with the most specific part of Charles' mission: humans and mutants working together. He turned out to be the greatest blessing to the X-Men, as he brought together the powerful mutants that helped save the original X-Men from death.

Magnetokinesis: Magneto has the mutant ability to manipulate all forms of magnetism. He can generate electromagnetic pulses leaving the world without power, and redirect the magnetism of the atmosphere itself, or create constructs.

Magnetic Force Field: Magneto can create bubbles of magnetic force that protect their inhabitants from the force of a nuclear explosion.

Magnetic Levitation: Magneto can force himself away from the planet or levitate his costume to "fly."

Ferrokinesis: Magneto can also manipulate metal at the subatomic level, even causing the iron in one's blood to explode.

Electromagnetic Sight: Magneto can perceive the world in terms of magnetism and energy.

Super Strength and Endurance: Magneto can augment his body with electromagnetic energy, giving him super strength and endurance. It is theorized that he could also do this to someone else.

Equipment: Costumes: Magneto utilizes several armored costumes made of the most durable metals on Earth molecularly bonded together.
Transportation: None known.
Weapons: None known.

Retrieved from "https://marvelcomicsfanon.fandom.com/wiki/Erik_Lehnsherr_(Earth-5)?oldid=244895"
Community content is available under CC-BY-SA unless otherwise noted.