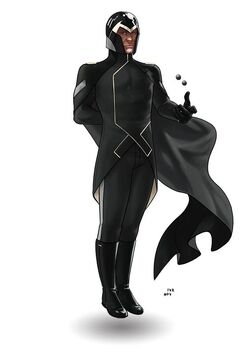 No longer will we be hunted, maimed, and killed by the inferior race. The time for debate is over. This is the time for action. Hear me, my mutant brothers and sisters, join my Brotherhood, and take your rightful place at the top of the world!

Erik Lehnsherr and his mother were taken by German soldiers when he was 11-years-old during World War 2. He then spent the next several years in a concentration camp, where he was secretly experimented on by Hydra scientists, including the Red Skull and Arnim Zola. The constant torturous experiments helped give way to Erik's mutant ability to manipulate metal develop.

The Red Skull started to try and push Erik further, and put him in the care of Sebastian Shaw, a fellow mutant who was just as sadistic as the Skull. He even went so far as to murder Erik's mother in front of him, which unleashed his power completely. He was then experimented on extensively as Hydra tried to utilize his powers until one day the camp he was being held in was raided by the Howling Commandos, who were led by Captain America.

Erik was rescued by the Commandos and carried out by a man named Logan. From there, Erik struck out on his own and vowed to one day use his powers to get revenge on Hydra for his mother. Over the years, he was able to hone his abilities and began killing smaller targets to work his way up through Hydra's chain of command, hoping to one day track down Sebastian Shaw.

Eventually, Erik met a man named Charles Xavier, who revealed to Erik that he was not the only mutant in the world. The deep connection shared by the two of them helped tamper Erik's rage, and he began to shift his desire into helping his people, which he had been unable to do during the war. He and Charles ended up recruiting the mutants Raven Darkholme, Warren Worthington, and Hank McCoy to form a team dedicated to ushering mutants into the new age.

However, it soon became clear that Erik and Charles did not share the same peaceful world view. Erik wanted for mutants to replace humanity as the Earth's primary species, while Charles wanted peace between mutants and humans. This fundamental difference between the two of them eventually led Erik to leave. Raven ended up sharing his worldview more, and decided to go with him. They opted to shed their humanity and rename themselves Magneto and Mystique.

They then decided to form their own team called the Brotherhood of Mutants, and began traveling the world to recruit more mutants that were fed up with humanity. Eventually, Magneto discovered that a woman he was once in love with had twin children, Wanda and Pietro, who were already showing signs of incredible power. Magneto took this to mean they must be his children, and proceeded to take them under his wing, wanting nothing more than to give his children a place in the world that not only accepted them, but worshiped them.