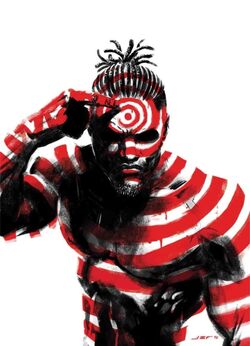 Erik Stevens Killmonger (born N'Jadaka) was a former African-American black-ops soldier of Wakandan origin through his father, Prince N'Jobu, who was also known by his new civilian name, Sterling Killmonger. Years after his uncle T'Chaka had reluctantly killed his father for betraying Wakanda by dealing with the black marketer and terrorist Ulysses Klaue, Erik grew up to be a strategic genius well versed in politics, science and economics, but at the same time he also became a savage while he was later serving in the U.S. black-ops unit, to which some of his closest subordinates and former neighbors would often called him by his notorious last name as a complimentary title, Killmonger, a feat that he eventually accepted within himself and his reputation.

Bearing a deep resentment of Wakanda and its royal line, N'Jadaka will stop at nothing to take the hidden kingdom for his own and see the world trembling before him, along with his act to fulfill and satisfy his vengeance against the current throne of Wakanda by forcibly dethroning his own cousin son and current heir T'Challa in order to accomplish his father's plan to seize control of the world using all of Wakanda's source of Vibranium technology and stop the oppression of people of African descent all across the world.

Seven months since Prince T'Challa became the continuous king of Wakanda after defeating his uncle, King S'yan, in a once-a-year ritual that allowed anyone of Wakandan royalty to become king/queen by defeating the current ruler in hand-to-hand combat, Erik seemingly killed T'Challa during their ritual combat and took the throne. As a result, he also digested the Heart-shaped Herb, which gave him superhuman senses and provided him with enhanced agility, strength, and over all physical capability before finally donning an upgraded version of the Panther Habit, with residents fearfully naming him as the Golden Jaguar.

However just before Killmonger unleashed his plans all over the world, the Black Panther himself returned and challenged Killmonger once more, eventually defeating Killmonger and ending his first campaign against the rightful king of Wakanda. Despite his first defeat, however, the escaped and frequently hiding Killmonger proclaimed that would never ever stop to take the hidden kingdom for his own and see the whole world trembling before his will and power with his unending attempt for a revolution.

All Hail the King!

Over a few years of his rule, T'Challa had encounter several adversaries throughout inside and outside Wakanda, including those who challenged T'Challa for the throne from factions within his own country. When Killmonger secretly allied forces with Ulysses Klaue in conspiring to destroy Wakanda and claim the kingdom own "their" own (in reality, Erik was only using Klaue to his own advantages), the Black Panther decided to team up with C.I.A. agent Everett K. Ross, the members of the Dora Milaje, Wakandan special forces, and even his former rival, M'Baku himself in the every end was convinced, to prevent Wakanda from being dragged into a anarchic civil war. Thankfully, with all the combined efforts of T'Challa and his collected allies, both Klaw and Killmonger were defeated and were taken into custody for a long while (before their eventual escape), keeping the nation of Wakanda safe once again from the hands its attempted invaders.

At some point in time concurrent to the separate events of the Second Dark Elf Conflict occurring in England, and in the wake of Killmonger's defeat in an attempt on dethroning the King of Wakanda himself, the international terrorist started to commence his back-up plan against T'Challa and his Royal Family, which was using his political expertise & diplomacy and exploiting all of Wakanda's deepest, darkest secrets throughout the rest of the entire world against them, specifically to every other governments all around the world, with the help of his new situational allies, Ulysses Klaw and a few members of the Intelligencia, who were also one of Black Panther's mortal archenemies since the beginning.

When these two powerful foes conspire to destroy and rebuild Wakanda once again, the Black Panther must team up with Everett Ross, the Dora Milaje, and now, with the special help of his newly-found allies, such as some members of the heroic teams, X-Men and his most oldest trusted team, the Fantastic Four, to prevent him and Wakanda from being the public enemy of the rest of the entire world, including some of his own allies from turning against him, before its too late.

In the aftermath of the raid on Wakanda, Killmonger was defeated for the second time and was apparently killed after detonating the Wakandan city of Necropolis, in an attempt of sealing and burying the only pathway beneath the Great Mound, the nation and the entire world's only known natural source of Vibranium, albeit it was proven wrong later on. According to various news reports, Erik was rumored to have been slayed during the final ordeal, only to reveal that his life was willingly spared by T'Challa and was imprisoned into a Wakandan cell, believing that he could still redeem himself as time passes.

Along with it, several of the noble people of Wakanda believes that N'Jadaka could be the true bridge between the outer world and Wakanda, helping as his means of having the rest of the world and Wakanda protect each other as one tribe unified, subsequently inspiring T'Challa to introduce Wakanda globally without committing violence towards other nations.

The Power of the Panther: N'Jadaka was given the powers and enhancements by the Bast's (Panther Goddess) ancient serum called the Heart-Shaped Herb, when he became the King of the Dead. All his peak human powers have been enhanced to superhuman levels, but to what extent is unknown. N'Jadaka has been empowered by the Heart-Shaped Herb to attain a physically enhanced state superior to a normal man.

Retrieved from "https://marvelcomicsfanon.fandom.com/wiki/Erik_Killmonger_(Earth-61615)?oldid=254580"
Community content is available under CC-BY-SA unless otherwise noted.