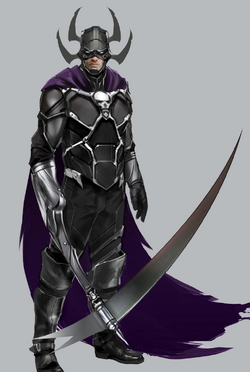 It's time for a new world order. Your place in that is up to you.

When he was growing up, Eric Williams always felt detached from humanity. After graduating High School, Eric faked his death from his parents and family to join Hydra.

After going through extensive training, he mastered the art of assassination and created the persona of the Grim Reaper. He went on to become one of Hydra's most valuable assets, and even teamed up with AIM to transform his brother, Simon, into Wonder Man. Although this backfired when he betrayed them, although the Grim Reaper became inspired to continue experimenting out of hopes to give Hydra more firepower.

Eventually, when Hydra started to mass produce its own army of Super-Soldiers, Grim Reaper volunteered to become one of the test subjects. He then led an assault on the Triskelion to steal S.H.I.E.L.D. info, but they were countered by the Avengers. During the ensuing battle, the Grim Reaper was bested in combat by the Black Panther, who proceeded to throw him into an exploding Quinjet.

Retrieved from "https://marvelcomicsfanon.fandom.com/wiki/Eric_Williams_(Earth-101)?oldid=249048"
Community content is available under CC-BY-SA unless otherwise noted.