Marvel Fanon
Register
Don't have an account?
Sign In
in: Characters, Templated Articles, No Dual Identity,
and 21 more 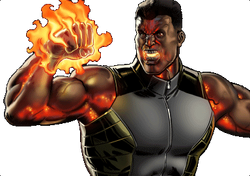 First appearance
If You Can't Take the Heat...

Eric Savin was an Extremis-enhanced man working as hired muscle for Aldrich Killian when he first encountered Happy Hogan on a visit to Stark Industries with Killian. There, he quickly raised Hogan's ire by taking off his guest pass identification and lounging casually on the furniture.

When he left again with Killian, Hogan discretely followed and eventually tailed Savin to a public drop where he was delivering ampules to a fellow Extremis subject. Hogan interfered in an attempt to snatch evidence, and Savin stepped in to stop him. The altercation was interrupted when his contact's Extremis virus went critical and exploded the man. Savin's right foot was blown off in the explosion, and yet he was still able to get up and walk away, regrowing a new one as he left the scene.

On his next mission for Killian, Savin was deployed to the mansion of Tony Stark to kill the industrialist. Watching from the armed helicopter as Stark's home fell under a withering missile assault he could only report back that the house was destroyed with no body to be seen.

He encountered Stark soon enough however, when sent with Ellen Brandt to Rose Hill, Tennessee, to recover documents that could incriminate his benefactor. Instead they found Stark alive and well, and attempted to capture him. Brandt was killed, and Savin temporarily incapacitated, by Stark's improvised tactics.

Savin finally caught up with his target when Stark deduced a location that Killian had been using in his criminal plot. Savin stumbled in on him interrogating Trevor Slattery about Killian's fake terrorist plot, stole up behind him and knocked him unconscious. Pressing Slattery for what information might have been divulged, he got only an evasive reply, before turning his attention back to Stark and handing him over to Killian.

Savin's next mission was to pilot the captured Iron Patriot battlesuit in a move against President Ellis of the United States. To that end he posed as Col. James Rhodes, the normal wearer of the Iron Patriot, and marched onto Air Force One along with the presidential contingent. Once the jet was well underway he overpowered the security team, captured the president and stuffed him into the suit to be delivered back to Killian.

After the president was well clear of the plane, Eric Savin planted a bomb and prepared to leave. He was interrupted by the arrival of Tony Stark in his guise of Iron Man, and the two fought. Savin surprised Stark with the extent of his Extremis abilities, but eventually Stark beat him when he activated the "unibeam" weapon in the Iron Man armor's chest. The weapon discharge blasted a gaping hole right through Savin's chest, apparently killing him, but he survived.

Extremis virus: The Extremis virus injected into living tissue results in a wide range of effects within the host organism. The intention of Extremis was to enhance, although the compound was flawed. In all hosts it causes intense pain until it either bonds with the host successfully, or destroys the host in a violent explosion. Even in cases where the Extremis virus has successfully bonded, the host organism may be at risk of the compound becoming unstable and detonating with sufficient force to burn nearby bystanders to dust, and crater solid concrete underfoot.

Exothermic Reaction: Hosts of the Extremis virus are able to consciously raise the temperature of parts of their bodies. The effect can be controlled to the extent that it might only scorch skin, or increased to the point where it can cause steel to turn into a molten state.

Superhuman Strength: The Extremis virus enhances the muscular power of the host considerably. The extent appears to vary within marginal limits, but most have demonstrated the ability to hoist the weight of a human male effortlessly in one hand and hurl such a weight across a room.

Tissue Regeneration: The Extremis virus imparts incredible restorative capabilities upon the host organism. Superficial wounds close over and heal completely in a matter of seconds, and severed limbs can take minutes to regrow.