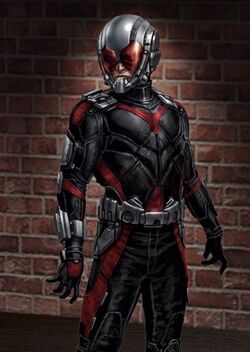 Oh, trust me, size is not a factor... if you know what I'm talking about.

Eric O'Grady was a Hydra sleeper agent within S.H.I.E.L.D. who was trained to be a specialist. After Hank Pym abandoned S.H.I.E.L.D., they began attempting to reverse engineer his Ant-Man suit, and eventually were able to create a prototype called the Black Ant Suit.

O'Grady was selected to help test run it, and he quickly became a valuable asset for both S.H.I.E.L.D. and Hydra. However, he began to wonder why his allegiances lied with either of them, and he attempted to run away and use the suit to support himself.

For a time, this worked, but when Hydra revealed themselves from within S.H.I.E.L.D., he knew they would be coming for him. He attempted to go on the run once more, but was quickly tracked down. He tried to make amends and swear his loyalty still lied with Hydra, but they were not taking any chances. O'Grady was brainwashed into serving unquestionably as the Black Ant, and quickly became a valued field asset in the fight against the Avengers.

Retrieved from "https://marvelcomicsfanon.fandom.com/wiki/Eric_O%27Grady_(Earth-101)?oldid=250055"
Community content is available under CC-BY-SA unless otherwise noted.