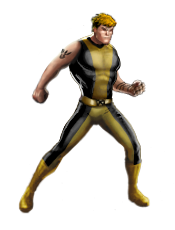 Ink was one of the members of the New Mutants team that was organized by Cannonball. He was a loud-mouthed, rude teenager who didn't care what others thought about him, as proven by when he stood up to two police officers who wished to arrest him in a tattoo parlor. He fought back using his bio-hazard tattoo, which produced the same effects as a biochemical weapon, making the police officer instantly very sick. Despite this, he was arrested anyway.

While sitting in jail and waiting to rot, Eric sassed a guard who ended up freeing him. As they were leaving, the guard turned off an image inducer and revealed himself as Professor X, who still believed in him. It was decided that, even though he was not a mutant, he would stay on the team.

Ink eventually befriended most of his teammates, especially Graymalkin.

Ink has no powers of his own. Instead, he had access to a mutant Tattoo artist, Leon Nunez, with the power of granting superpowers to other beings by tattooing iconic power symbols on them, evocative of the power he wants to bestow. The downside to this is that it takes away a little bit of his will every time he does it. Nunez made Ink believe that his powers were his own, purposely misleading him into believing he was a mutant.

Ink has been shown with the following tattoos and powers: