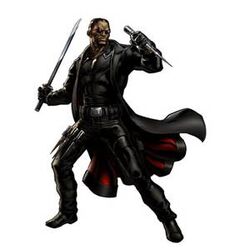 Black
Unusual Features
Dhampir; he has sharp maxillary canine fangs. At one point during his career, Blade possessed several unique black tattoos which ran along the back of his neck and shoulders.
Status
Citizenship

Single
Occupation
Adventurer, vampire hunter; formerly vigilante
Education
Secondary School, later home schooled by Jamal Afari
Origin
Origin
Born a dhampir with all of the vampire's strengths but none of their weaknesses, Blade became a vampire hunter to avenge his mother, who was killed by the vampire that made him what he is.
Place of Birth
Soho, London, England, United Kingdom
Creators

Little is known about Blade's life before being held prisoner in Murderworld. It can be assumed to be similar to his mainstream counterpart.

Blade was found trapped on Murder World and was freed by the heroes, aiding them against Arcade and later against Doctor Doom and his Masters of Evil.

When the Superhuman Civil War broke out, Blade was one of the many heroes to join Captain America's Anti-Registration movement. He was also part of the reformed Ultimate Alliance.

Retrieved from "https://marvelcomicsfanon.fandom.com/wiki/Eric_Brooks_(Earth-6109.2)?oldid=168830"
Community content is available under CC-BY-SA unless otherwise noted.