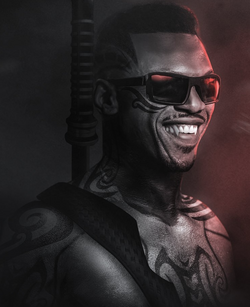 It's time for you to taste my blade! I've always wanted to say that.

Unaware that his parents were once the most vicious vampire hunters to ever walk the Earth, Eric Brooks became heartbroken when one day they were slain by some of their old enemies. Eric was then taken in by one of their old allies, Jamal Afari, who was secretly a vampire himself.

He trained Eric in the art of monster slaying, quickly turning him into a living weapon. However, after his first encounter with real vampires, he was badly injured and close to death. Revealing the truth to him, Jamal infected Eric with vampire DNA to save his life, transforming him into a "Dhampir", or half-human, half-vampire.

With Jamal dead, Eric was forced to hone his newfound vampiric powers on his own. However, he quickly got the hang of how powerful it made him, even becoming a legend among the vampire community, known as The Daywalker, due to being able to survive in sunlight.

Blade's vampire and monster hunting activities inevitably brought him into the paths of several other heroes, most notably Doctor Strange and Ghost Rider. While he mostly prefers to stay out of the limelight, he is more than willing to help any of his allies whenever or wherever they need him.

Retrieved from "https://marvelcomicsfanon.fandom.com/wiki/Eric_Brooks_(Earth-101)?oldid=250189"
Community content is available under CC-BY-SA unless otherwise noted.