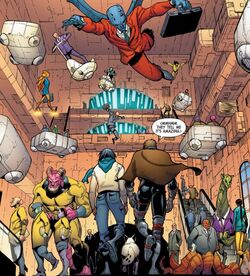 The Ennilux were a tribe that broke away from the main Inhumans branch in Attilan thousands of years ago. The tribe has evolved into something of a cross between the mafia and a corporation. The Ennilux were ruled by The Capo until his death.

When their chief technology officer Marishi Spin gathered the Ennilux together to elect their new C.E.O., he also planned to unveil a new piece of technology called the Antigen, an inhibitor of Inhuman abilities. However, before the device was stolen by Fantomelle before the presentation.

Equipment: Ennilux possess uncanny devices and treasures in their vaults, including the plans of Archimedes' death ray, and an unknown thing from da Vinci.
Transportation: Enniluxian Attack Zeppelins
Weapons: None known.

Retrieved from "https://marvelcomicsfanon.fandom.com/wiki/Ennilux_(Earth-1010)?oldid=177001"
Community content is available under CC-BY-SA unless otherwise noted.