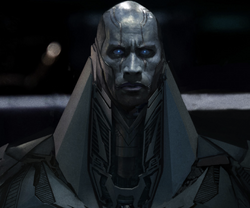 The Mutant Messiah, The First One, His Almighty One
Identity

Human, mutant... bah, these labels are obsolete. Meaningless. At the end of time, all that will matter is the strong overpowering the weak.

En Sabah Nur was the first mutant to ever be born. Over time, he adopted the name Apocalypse and began amassing knowledge and power, until he was betrayed by his subjects and placed in suspended animation for centuries.

He was eventually awoken by the emergence of Charles Xavier's telepathic abilities. Threatened by his power, Apocalypse kills him and absorbs his abilities, quickly rebuilding his empire in what was once known as the United States of America.

Apocalypse reigned for over a decade, and while his empire began to crumble thanks to interference from the X-Men and the Avengers, a team of multiverse hoppers known as the Outsiders came to Earth-9999. When they offered their assistance to Apocalypse's resistance, he took matters into his own hands. He transferred his mind into the body of his Horseman of Death, the Archangel. He then led his forces into battle, and eventually met his end at the combined hands of the Outsiders, Cable and Sabre, and their mother from Earth-9999, Jean Grey, after he murdered Cyclops.

Retrieved from "https://marvelcomicsfanon.fandom.com/wiki/En_Sabah_Nur_(Earth-9999)?oldid=257402"
Community content is available under CC-BY-SA unless otherwise noted.