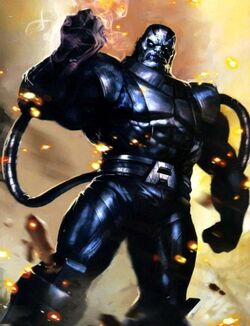 Everything they've built, will fall! And from the ashes of their world, we'll build a better one!

En Sabah Nur, also known the others by his intriguing and controversial pseudonym, known as Apocalypse, was apparently born in the late 8000 B.C. (claiming to have been worshiped by several ancient civilizations over his many lives, being called the titles of Elohim, Shen, and Ra, among other names), and was the very firstborn of the mutant race, as he ruled the world in Akkaba, his birthplace, of prehistoric Egypt.

According to both mythological and historical texts, wherever Apocalypse was, he always had four primary followers that he would bestow powers to, the Four Horsemen, and wherever he ruled, it would eventually end in a cataclysm or an apocalypse of some sort. Throughout his reign, he had helped grow and eventually destroy many cities and civilizations who would deflect his tyrannical rulership all over Egypt, before the known recorded history. Due to this, he started to believe himself to be a god, thinking that he was untouchable, and able to kill at a sudden impulse to any who desires or even dares to stand in his way.

Throughout his as the unrecorded historical ruler of Egypt, Nur believed and wold always believe in the high standard doctrines and other philosophies his former deceased mentors, Baal and the Sandstormers, have once taught him and has always reminded him, that everyone in this world lives and dies through the primitive concept of the survival of the fittest, no matter what race you might belong to, either you may be a human, a mutant, or any other kind of being. This personal philosophy of his was able to be come in handy whenever Nur, his Horsemen, and his entire kingdom was threatened by other conquerors and invaders, which also included fellow mutants, superhumans, and even ancient vampires, and sometimes most of them has even challenged the Eternal Pharaoh himself, only to humiliatingly face themselves both in defeat, and in death, with only few of his foes were able to retreat and come out of his kingdom of terror alive.

Later on during his early days as the powerful mutant and Egyptian ruler, Nur saw what looked like a mysterious mirage several hundred meters away across the Egyptian desert. Nur and his Horsemen traveled to the source of the mirage and discovered an advanced hatch, looking like it was made out of metal that not of this world, upon which it was proven to be true. After opening the hatch, Nur and his Horsemen discovered the inner workings of a fragment of a Celestial ship that crash landed on Earth millions of years ago during the age of the Eternals, revealing for the spaceship to be abandoned by the Celestials. His travels then became fueled by a single-minded purpose, to find the key that would unlock the secrets to this alien technology. Nur tried to learn more about the possible origins and how he could eventually control it from time to time using his super-genius intellect, only to learn half of what he wanted to know about it, much to his disappointment.

However, Apocalypse’s blood had suddenly became infected with techno-organic virus released by one of the ship's uncontrollably-leaking pipe, and after it accidentally spilled into his left arm's regenerating open-wound, the infection allowed Apocalypse to not only transform into an even more powerful being, but to also interface with the Celestial ship, gaining him more intellect about the Celestial race than he used to know before, with Nur eventually claiming the ship as his own possession, although he saw it more as a massive trophy later on, rather than, implying that he was able to learn every single detail he needed to know from it in only a matter of several days, before finally abandoning the alien ship to slowly rust in the coarse of sand once again, with no other witness who saw the remnants of the ship and knew what Nur and his Horsemen was previously up to.

The End of His First Reign

In 3600 B.C., En Sabah Nur was growing old in his current form. Aided by his Horsemen, he performed a ceremony that would allow him to transfer his consciousness and previously acquired abilities into a new host, a mutant who had enhanced healing and longevity. His priestess began the transfer through an Celestial-based technology Nur has previously designed and single-handedly created a long time ago, but a secretly-formed coup, led by the allied forces of the righteous Egyptian lord and warrior Khonsu, was launched by a few of his servants.

Khonsu and his super-powered men were able to defeat most of his undefeatable Horsemen and begin the destruction of the pyramid they were performing the transfer in. However, one of Apocalypse's Horsemen was able to remain alive until the transfer was complete, resorting to activating the trap door beneath them that ultimately prevented them from ever interfering with En Sabah Nur's transferal of essence. The Horseman Death, made sure the transfer was complete and En Sabah Nur was safe within a stasis bubble before allowing herself to die at the cost of saving her master.

After approximately 4000 years of hibernation, awaken in the mid-1990s. On his wake he was bent on destroying the world and reshape society in his own image, after seeing that humanity itself has apparently "grown weaker," in his absence. He gathered Archangel, Storm, Psylocke and Magneto as his new Four Horsemen, and kidnapped Professor X in order to transfer his consciousness to his body to have the ability and power to control the mind of every living mind on Earth, specifically to those who would oppress mutantkind into extremity.

As a result, the X-Men has assembled once more tried to stop him and his catastrophic schemes to end humanity and build his own "mutant paradise," at the heart of his former childhood neighborhood, the city of Cairo. His horsemen eventually turned on him, after the X-Men effectively convinced and made them realized that he is not what he seems he claimed himself to be. Altogether, they finally attacked Apocalypse, along with Xavier and the other mutants in order to subdue him, but it wasn't enough, right until Jean has fully unleashed the Phoenix Force, for the very first time in her life, resulting in his second defeat. He was incinerated by Jean through the the Phoenix Force, and was apparently killed by the latter.

Despite Apocalypse's second demise has fallen at the hands of the X-Men, it was eventually revealed that Apocalypse has survived his untimely death, with him with that he was able to be successful in secretly replicate half of Xavier's telepathic abilities into his own, showing that he had the chance to survive the disintegration caused by the Phoenix, by using his newly-absorbed powers to permanently transfer his essence into a random civilian's body, who has already died during Cairo's partial destruction, by the very second his previous body was disintegrated by the Phoenix.

Before the heroic mutants have finally left the aftermath of the battleground, one slightly-injured civilian has tearfully thanked the X-Men for saving their town from ultimate destruction, and their lives in the process. As they left the town enlightened by the man's heart-felt gratitude, it was then revealed that was En Sabah Nur himself in a new body, with him secretly taunting the X-Men that they were nothing, but weak, inexperienced amateurs, who were easy to be manipulated. For the next several years, Apocalypse continued to live in his new body, hiding as he travel across the world for reasons unknown, while he currently awaits for the exact time he would be able to grab his next great opportunity, to be reborn as another newer, more powerful, and higher form of mutant, once again.

The next following years until reaching the modern days of the 21st century, Nur has persistently traveled all across the globe, where he eventually met one of his known secret admirers, the former living scientific legend who was Doctor Nathan Essex, whom he unexpectedly met inside a famous museum, the Museum of Egyptian Antiquities, located in his former neighborhood, the once historical ancient city of Cairo. After a quite while conversing their deepest interests about Egyptian culture, Nur and Essex eventually changed the subject unknowingly until they started talking more and more about the mythology and folklore many of Egyptian historians and natives haves known as the title of Apocalypse.

After revealing his true form to Essex, Nur then offered to give Essex most of the hidden ideologies and teachings that he once learned about the Celestial race, to learn how to create, manipulate, and control an advance technology same to their's, and along with it, helping him more in order to become a more powerful superhuman being himself than he already was, to give him the time to further his research, but at a cost: his loyal servitude to him, in secret, and also by using his scientific aptitude into helping him slowly transform into a higher form of a being, specifically the example of having the next step towards the evolution of mutantkind.

Only a year before the events of Ultimate War, it was revealed that Sinister had secretly betrayed Apocalypse, seeing his vision of the future as nothing but chaotic without having any strict order and rule it humanely, and had instead created a counteractive techno-virus that attacked only Apocalypse's psionic field inside his current body's mind, forcing the ancient mutant to slowly faint, having no other choice but to enter his newly-located hibernation sanctuary that he purposely and confidentially reconstructed below the Museum of Egyptian Antiquities, since it was the only in order to keep himself mentally awake and miraculously alive from the deadly neuron-degenerating techno-virus of Sinister.

Homo Superior Physiology: Apocalypse has constantly evolved to survive, increasing his powers over the centuries. His original ability to control his molecular structure was augmented by Celestial armor once he entered the Ship and unexpectedly (and unknowingly) became the Evolutionary Caretaker. He was also exposed to at least two different techno-organic viruses over the years, which he assimilated and made his own.

Retrieved from "https://marvelcomicsfanon.fandom.com/wiki/En_Sabah_Nur_(Earth-61615)?oldid=257372"
Community content is available under CC-BY-SA unless otherwise noted.