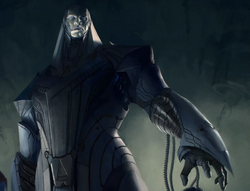 Soon, the Asgardians will destroy themselves, leaving all Nine Realms open for the taking... for Apocalypse!

En Sabah Nur was the first human being to ever develop an X-Gene, spawning in ancient Egypt and spreading his will across the world throughout time.

Eventually, Apocalypse was betrayed by his Horsemen and placed in suspended animation for centuries, until he was released in the modern day. For a few years, his ideologies caused him to clash with the X-Men, especially their leader, Charles Xavier.

But things changed after the Order of the World Tree merged the Nine Realms. Apocalypse was able to successfully seize control of the mutant population following Xavier's death, along with most of the X-Men. In order to begin amassing power in this new world, Apocalypse began to forcefully recruit a new set of Horsemen, who would have no choice but to obey his will.

He was joined in this endeavor by Jean Grey, who had been completely taken over by the Phoenix. She agreed to become the Horseman of War in order to have her power greatly enhanced, and together the two of them went on to recruit Namor, Medusa, and even Spider-Man, as Famine, Conquest, and Death, respectively.

After Apocalypse and his new Horsemen had assumed command of the Brotherhood of Mutants and set up shop on the island of Krakoa, he began brokering a piece treaty with Surtur in order to ensure mutants a rightful spot in the new order.

Eventually, Apocalypse's alliance with Mephisto resulted in his downfall. When they tried to betray Surtur and claim power for themselves, when it became clear they could not win, Mephisto betrayed him and assisted Surtur in completely obliterating him.

Retrieved from "https://marvelcomicsfanon.fandom.com/wiki/En_Sabah_Nur_(Earth-2001)?oldid=262364"
Community content is available under CC-BY-SA unless otherwise noted.