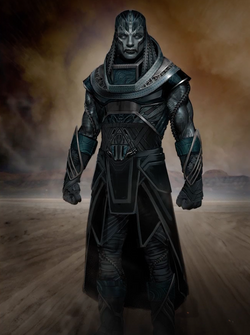 Earth-101
Base Of Operations
The Sphinx
Characteristics
Gender

You are all my children, and I have finally returned to set you free from the shackles of humanity.

En Sabah Nur was the first mutant to ever be born on the planet Earth in Ancient Egypt. He was raised as a scavenger to rebel against the rule of Rama-Tut, who went on to become his fiercest rival. Eventually, when Tut disappeared, Nur became crowned the ruler of the Earth, dubbed Apocalypse. As his power grew, he began to recruit other mutants from around the world as his Horsemen; Death, Pestilence, War, and Famine.

However, Apocalypse was betrayed by his subjects, and placed in suspended animation for centuries. It wouldn't be until the modern day that Apocalypse was freed by Mister Sinister, who outfitted him with modern technology. From there, he began to hatch a plan to recruit four new Horsemen and eradicate humanity from the face of the Earth.

It wasn't long until he had recruited the Horsemen, including Archangel as Death, Sabretooth as Famine, Blink as Pestilence, and Magik as War. Backed by some of the most powerful mutants he could find, Apocalypse began enacting his plan to build inhibitor towers across the Earth that, when activated, would target the human genome and wipe out the entire species.

He was, of course, met with opposition from the X-Force, who took the recruitment of their teammate Angel to mean war. Eventually, Angel broke free from his brainwashing and helped the X-Force to save the other Horsemen, while Forge successfully redesigned the inhibitor towers to target Apocalypse himself. When activated, he was met with great agony and despite still being able to fight off the X-Force, his mind was shut down by the combined forces of Professor X and Jean Grey, which resulted in his body instantly decaying and fading away.