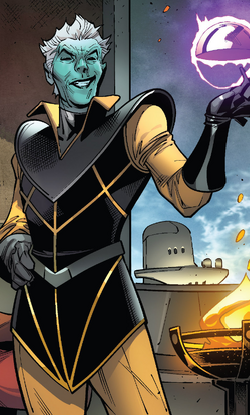 The Master of Games
Identity

Category:Elders of the Universe
Alignment

You may, of course, earn your freedom by testing your mettle in the Contest of Champions!

One of the oldest beings in the universe, En Dwi Gast is a member of the organization called the Elders. He went on to earn himself the name "Grandmaster" due to his affinity for games, tricks, and challenges. This eventually led to him setting up shop on the rundown planet of Sakaar, which was surrounded by wormholes. He believed this provided him with endless contenders.

He would eventually send his daughter, Va Nee, to scour the universe to find more suitable contestants. She came back to him with word the endless supply of heroes on Earth, which fascinated him. He then set up to perfect Contest of Champions, which would pit hero against hero in the arena, as well as forcing them to work their way through seemingly impossible and endless mazes and puzzles, facing their greatest fears along the way.

He sent his daughter to recruit the likes of the Hulk, the Thing, Captain Marvel, Wolverine, Colossus, and several more. Of course, they tried to rebel at first, but were quickly put in their place by the inhibitor discs the Grandmaster had surgically implanted in their necks. For nearly a month, the Grandmaster enjoyed putting the heroes through endless torture until one day, his daughter betrayed him and helped the heroes escape.

He became bitter and enraged, seeking an opportunity to exact revenge. He eventually came into contact with Thanos, who was impressed with the Grandmaster's intellect and aptitude for making heroes suffer. The two struck an alliance to locate the Infinity Stones and use them to wreak havoc on the heroes of Earth.

Retrieved from "https://marvelcomicsfanon.fandom.com/wiki/En_Dwi_Gast_(Earth-101)?oldid=250187"
Community content is available under CC-BY-SA unless otherwise noted.