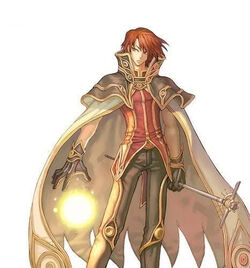 His early life is Unknown. But he was the Court Wizard of Uther Pendragon.

The Birth of the Child

When Uther made a deal with Merlin to have his love-of-his-life fall in love with him, Emrys agreed, only to have the child he will have with her. Uther agreed, and when the child was born, he took him away, and took him to the town of Calamine and gave him to a family, with the foster called Ector and his son, Kay. Merlin told two his that his name is Arthur

He would then watch Arthur from the distance, seeing him grow, and helping the town. But to see Kay being stubborn, and arrogant is one thing. But he did know of the prophesied about him when Cynyr Ceinfarfog said he be like this, and would have supernatural magical abilities. And so, Merlin also kept a eye of Kay in case anything happens

Sword in the Stone

5x stronger then a Human, but can be augmented with magical forces

Retrieved from "https://marvelcomicsfanon.fandom.com/wiki/Emrys_Ambrosius_(Earth-160)?oldid=206579"
Community content is available under CC-BY-SA unless otherwise noted.