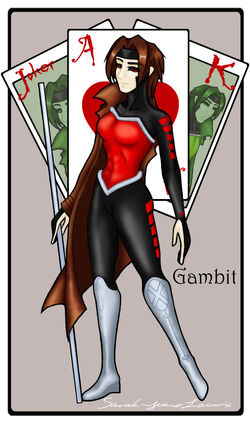 Single
Origin
Origin
Chance was recruited into the X-Men to track Gambit and be trained in her powers.
Creators

You seek honesty in a dishonest world. Safety in danger. You seek a thing that I suspect is not of this Earth. But the X-Men are a good place to start.

Chance's 616 counterpart is Gambit, but she does not share his history. During the Marvel NEW! relaunch, Chance was cloned from the DNA of Gambit and Mr. Sinister. She was briefly brainwashed to be his soldier, but was broken from his control and welcomed into the X-Men. She has worked with Polaris on tracking Gambit and the Freedom Force.

Gambit's Powers: Chance has all of Gambit's powers from 616.

Sinister's Powers: Chance can access some of Sinister's abilities.

Retrieved from "https://marvelcomicsfanon.fandom.com/wiki/Emma_LeBeau_(Marvel_NEW!)?oldid=107959"
Community content is available under CC-BY-SA unless otherwise noted.