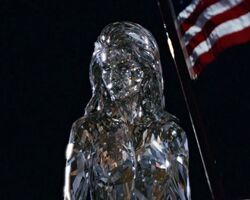 Emma Frost developed her telepathic abilities at a young age, and eventually attracted the attention of Apocalypse, who had already absorbed the telepathic abilities of Charles Xavier. The two form a connection, and Apocalypse recruited Emma to be his Queen. After he established his empire, he forced Emma to bear him a son, which traumatized her. After Salvator was born, Emma began developing depression and having panic attacks.

One day, she simply vanished from the Pyramid. She donned her diamond form, which makes her impossible to track, and left for the X-Men, who took her in to treat her trauma. While living on Krakoa with them, she formed a close relationship with the couple Mystique and Sabretooth, who both fell in love with her. Eventually, the three of them agreed to all be together, as it helped Emma to be surrounded by people who actually cared for her and her wellbeing.

Super Strength while in Diamond Form

Cannot Use Telepathy while in Diamond Form

[[Category: In a Relationship with Raven Darkholme and Victor Creed Characters]]