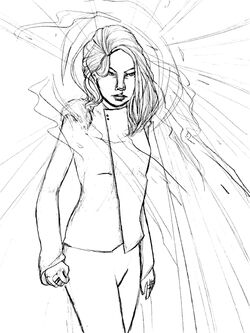 Earth-82016
Base Of Operations
Brotherhood Base
Characteristics
Gender

Look, I may have amnesia, forgot everything I knew about myself, but I haven't forgotten about my damn dignity.

Emma Grace Frost was one of the children of a rich family in Boston. The second of three daughters, Emma also had two older brothers, named Deacon Frost and Christian Frost.

The three Frost sisters were mutants with telepathic abilities, and it matured upon reaching their puberty. Emma was her father's favorite daughter, making her older sister, Adrienne, jealous of her. Emma suffered from intensely painful migraines and, while attending class, began to hear other people's thoughts and collapsed. Emma was scared of what she was capable of at first, but practiced to control it. Christian Frost, Emma's brother, had a drug problem, and has been a dissapointment to his parent's eyes. Their father's heart failed, and their father had to undergo medical exams. It came time when their father was very old and sick, almost to the point of dying. He chose a worthy heir to the family fortune before he passed away. Emma was the most obvious choice, being their parent's favorite.

Emma and her family went bankrupt due to Christian's addiction and overuse of drugs and money, and was kicked out of the house. Emma left their mansion for New York to get a decent job, where she had challenges with. She eventually got a job offer at a big hotel. During the interview, Emma used her powers on the HR manager, Moira McTaggert. The trick failed, and killed Moira instead. The staff found out about this and had Emma arrested.

While in jail, Emma met Selene Gallio, who also had mutant powers. Together, they tried to escape. They eventually stumbled upon a Sentinel that destroyed the city. Emma was one of the victims, and she was rushed to a hospital, along with Charles Xavier. Charles joined her to the hospital room because he thought that it was all his fault, and the Genoshan War. After her recovery and sudden amnesia, Charles let Emma stay at his place.