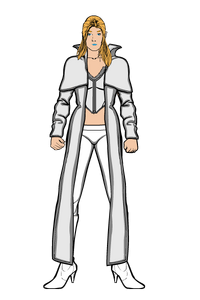 The identity of Emma's biological parents remains shrouded in mystery. She was adopted and raised by Winston and Hazel Frost, influential and prosperous millionaires along with her biological brother, Alec. During their childhood, they were frequently bullied by their adoptive sisters, Alyssa and Olivia, who had always looked down on them due to the fact that they were adopted. They also couldn't earn the approval and love of their cold-hearted and domineering adoptive parents. Try as she might, she could never meet their impossibly high demands. However, she did all she could to support her quiet and socially awkward younger brother, who at some point suffered from a mental breakdown.

After some time her telepathic powers began to manifest, allowing her to read the minds of other students and get answers to tests. As a result of this, her grades gradually improved and she finally earned the recognition and praise she desired from her parents. One of the teachers suggested that Emma could tutor poor students who weren't doing well with school. She enthusiastically agreed and that's how she met Scott Summers. The two of them immediately hit it off, becoming fast friends and bonding over the fact that they were both mutants. Their platonic relationship had gradually grown until both realized they loved each other. However, the romance was jeopardized when, envious of Emma's success, Alyssa and Olivia learned about their relationship and brought it to their father's attention. Infuriated that his daughter was dating someone from a lower class, Winston forbade his adopted daughter from dating Summers. Although Emma attempted to fight back, she changed her mind and obeyed her father in order to not provoke any unnecessary anger that could hurt her or Alec.

At some point, Emma has become a member of an elite secret society comprised by mutants known as the Inner Circle. She now introduces herself as the White Queen.

Defense Training: Emma had some training in hand-to-hand combat.

Emma possesses the normal human strength of a woman of her age, height and build who engages in moderate regular exercise.

Retrieved from "https://marvelcomicsfanon.fandom.com/wiki/Emma_Frost_(Earth-7535)?oldid=259215"
Community content is available under CC-BY-SA unless otherwise noted.