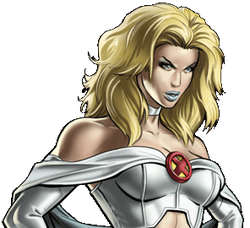 Emma Grace Frost was a leading member of an old Boston mercantile family, which arrived from England in the 1600s. The second of three daughters, Emma also had two older brothers, named Deacon and Christian Frost.

Unknown to their family or themselves, the three Frost sisters were mutants, whose telepathic abilities matured upon reaching their puberty. Deemed unfit in her father's eyes, Emma produced low grade point averages and was a social outcast while attending the Snow Valley School for Girls. Emma also suffered from intensely painful migraines and, while attending class, began to hear other people's thoughts and collapsed. After the emergence of her powers, Emma used them to excel in all aspects of her life. Due to a crush that Emma had over a teacher of hers, Ian Kendall, Emma decided a future in teaching, much to her father's disapproval, but, after being seen kissing Mr. Kendall in front of the Frost estate, Emma's father blackmailed her to give up her idea of teaching. After her brothers' homosexuality was revealed to the family, Winston Frost began to alienate Christian and Deacon, resulting in the first's drug abuse and attempted suicide and the second running away from home. When it came time for their father to choose a worthy heir to the family fortune, Christian was automatically dismissed due to his drug problem and because he was gay. While the older sister, Adrienne Frost, seemed the most obvious choice, their father chose Emma. At that moment, Christian was picked up by a mental institution, and, surprisingly, Emma refused to be her father's heir, choosing to make her own way through life instead.

Emma began to work minimum wage jobs and stayed at a hotel. After attempting to use her telepathy to pay for the meal with a newspaper instead of money, Emma was eventually caught and made to wash dishes, where she met Troy Killkelly, who she was attracted to and moved in with. Unfortunately, Troy owed money and Emma used her telepathy at a Casino to erase their financial problems, but the loan shark insisted that they owed more, for interest. Troy suggested that they pretend to kidnap Emma and have Winston pay a ransom, but Winston refused, stating that his daughter was already dead to him. After Troy was killed, Emma absorbed all of the shark's memories of business. After her sister Adrienne took Emma's kidnapping video to the news, Winston was forced to pay the ransom. However, Emma freed herself using her abilities, took the money and moved to New York.

Emma's beauty and talents brought her an invitation to join the Hellfire Club, an elite social organization of the world's wealthy and powerful figures, as a stripper. As a dancer/stripper at the Hellfire Club, Frost became the ally of Sebastian Shaw, who was a member of the Club's Council of the Chosen, a group which secretly conspired to achieve world domination through economic and political means. Like Frost, Shaw was a mutant. Unknown to her, Adrienne was the former White Queen and after her death at Deacon's hands the Club had spotted Emma as the possible replacement.

Telepathy: Since her introduction, Frost has displayed the telepathic standards of broadcasting and receiving thoughts, mind-control, altering perceptions and memories, projection of offensive blasts of psionic energy causing mental pain or unconsciousness, astral projection, mind switching, brain engram modification, mental sedation of unconscious victims, induction of mental pain by touch and limited psychometry. Frost is also very adept at performing 'psychic surgery': the utilization of pin-pointed psionic energy to exert absolute control over individual brain functions such that the physical form can be manipulated (i.e., injuries healed, disabilities repaired, the nervous system, etc), a sub-skill of telepathy unusual for even the most powerful of telepaths, but one that Emma is keen to utilize whenever the occasion benefits her. Frost's abilities rival those of Charles Xavier's, her incredible power and conniving ways are evident in her first appearance whereby she manages to capture and sedate him.