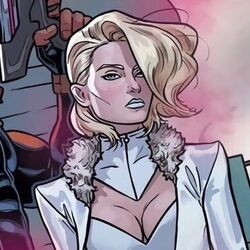 Oh, darling, you can be a hero all you want. But why ever should that mean you can't use your powers to get something you want?

When Emma Frost's telepathic abilities manifested, she instantly began using them to get anything she wanted. She became bored with her family, and decided to seek out others will abilities similar to hers. However, not before she psychically conned her father into giving her their family's entire fortune.

She later went on to join a group called the Hellfire Club with other mutants, led by Sebastian Shaw. They were dedicated to toppling the human regime over time by manipulating them into going to war with each other. However, their plans were interrupted when Magneto and the Brotherhood of Mutants attacked the Hellfire Club. After Magneto's helmet was knocked off in battle, Emma peers into his mind and discovers the horrible tragedies Sebastian put him through as a child. She then makes contact with him and encourages Magneto to kill Sebastian.

After most of the Hellfire Club is dead, Emma offers her membership to the Brotherhood. Magneto welcomes her to the team, and quickly comes to value her importance. When she discovered she would be pitted against other telepaths, like Charles Xavier and Jean Grey. Emma was excited at the challenge, wishing to prove herself superior.

Retrieved from "https://marvelcomicsfanon.fandom.com/wiki/Emma_Frost_(Earth-101)?oldid=249045"
Community content is available under CC-BY-SA unless otherwise noted.