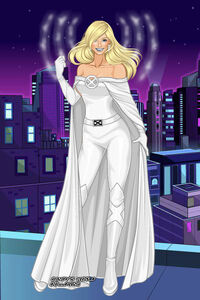 An urbane, mutant telepath with a well-noted dry wit initially known as the White Queen, Frost has evolved from one of the X-Men's most dangerous foes to one of its most central members and leaders.

Emma's early history is the same as that of her Earth-616 counterpart, seemingly only the parts concerning her initial tenure with the Hellfire Club and Generation X.

A Year after the death of Jean Grey Emma begins to start having a crush on Scott much to the dismay of the X-men and Scott's children. But they soon later approve thus far after 2 years Scott married Emma and she became the New Mrs. Summers until the resurrection of Jean Grey. Emma agreed that she and Scott should divorce but remained commitment to their daughters.

Emma Frost possesses telepathy abilities matching those of Charles Xavier. Frost has been cited as a "World-class telepath", "Omega Class Telepath “and a "Psi of the Highest Order" capable of extraordinary telepathic feats.

Retrieved from "https://marvelcomicsfanon.fandom.com/wiki/Emma_Frost-Summers_(Earth-16160)?oldid=235455"
Community content is available under CC-BY-SA unless otherwise noted.