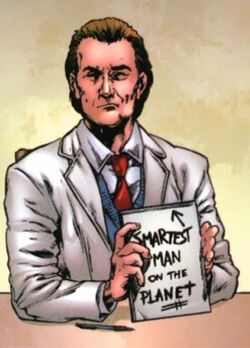 Ladies and gentlemen... It's the "Smartest Man on the Planet," everybody!

-- Emil Burbank, referring to himself

Emil Zebediah Burbank was a man with many notable aliases and possibly the greatest intellect on the planet. He had doctoral degrees in biology, chemistry, metallurgy, psychology, economics, and literature from three different universities. As a child, Emil was noted for malicious and homicidal retribution against those he feels have wronged him, having a group of teenagers who bullied him killed in a building fire he started.

According to some rumors from the people he once knew during his childhood, Emil also sexually abused his older sister after drugging her unconscious with chemical compounds, eventually leaving her in a permanent catatonic state, although Emil immediately denied the latter incident had ever happened, leaving the confirmation whether it was true or not. At the age of ten, his parents died in a car "accident," which he arranged to collect on their life insurance.

Unbeknownst to everyone else, Emil actually engineered the deaths of his parents in secret by sabotaging their automobile in order to profit from a large life insurance policy he had taken out in their names. In the success Emil had found through committing a sinful deed, went on to found his own science and research company throughout the cities and state of New Troy, to which he named Burbank International.

In his adulthood, he has always been a controversial figure in the public eye due to his corrupt and apparently illegal business dealings with several organizations affiliated with a few crimes and terrorism, but he has also maintained political popularity across the entire globe. As time passes by, Emil came to practically run the city itself on his own power. Taking ownership of half the media outlet across the country, Burbank's positive public image went practically unopposed, right until the heroic figure from the stars came to appear on Earth in the form of Hyperion.

Ever since Hyperion's actions and deeds across the globe had been greatly affecting Emil and his company's reputation in the worse way possible, Emil began his intentions of taking out the world of the heroic extraterrestrial guardian, whom he continuously views as an obstacle to his megalomaniacal plans and achievements for the world in order to gain full influence and power, and ultimately posing him as a threat to the very existence of humanity from an ideological perspective due to his as a overpowered cosmic being from an unknown origin, deeming Hyperion as someone not to be trusted with, no matter the case it would be.

As a result to both his villainous personality and his genius intelligence, these traits made Emil an extremely powerful and formidable opponent to Hyperion, eventually becoming his greatest archenemy for the next following years. Given his growing high status as a manipulative and overly clever villainous figure, he has often come into conflict not only with Hyperion, but also with the heroes' closest allies and subordinates, throughout the years of his expanded life as the infamous superhero skeptic.

Retrieved from "https://marvelcomicsfanon.fandom.com/wiki/Emil_Burbank_(Earth-61712)?oldid=220075"
Community content is available under CC-BY-SA unless otherwise noted.