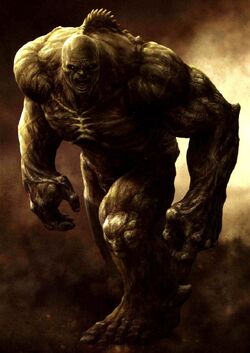 AS the director of S.H.I.E.L.D., Colonel Nick Fury's superiors wanted Blonsky recruited into the Avengers Initiative due to his military record and status as a war hero. They planned to blame all the destruction he caused in Harlem on the Hulk, and ordered Fury to ask Gen. Ross to release him into S.H.I.E.L.D.'s custody. Instead, Fury tasked Agent Coulson to figure out a way to follow orders, yet ensure that Blonsky would remain imprisoned. Agent Sitwell urged the reluctant Coulson to send Tony Stark to meet with Ross and inadvertently sabotage the deal, thereby ensuring that Blonsky remained in the General's custody and off the Avengers for good. Stark was successful in annoying the General so much that it caused Blonsky to remain imprisoned. It was later revealed that Blonsky had been transferred to a cryo-cell in Barrow, Alaska, now in S.H.I.E.L.D.'s custody.

Retrieved from "https://marvelcomicsfanon.fandom.com/wiki/Emil_Blonsky_(Earth-61615)?oldid=173874"
Community content is available under CC-BY-SA unless otherwise noted.