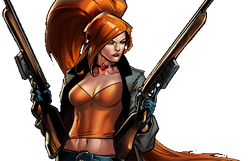 In the Hyborian Age, a meteorite landed on Earth. It was controlled by an an ancient entity which called itself the Hellfire Helix. The Helix sent its agent, Tae Kwan S'yn, to find a host for it. However, a local human found the rock first, and fought Tae Kwan S'yn for possession. In the fight, the meteor was smashed, a part of it was embedded in the human's chest, the explosion also killed the nameless man's tribe. The man vowed revenge on Tae Kwan S'yn. Because of the gem in his chest, he became an immortal later known as Ulysses Bloodstone.

Bloodstone would travel all over the world, looking for Tae Kwan S'yn. Because of Tae Kwan S'yn's ability to summon monsters, Bloodstone gained a reputation as a monster hunter. The vendetta ended when the truth came out: the Hellfire Helix had needed a host, and had chosen Bloodstone. Bloodstone killed himself and Tae Kwan S'yn to prevent the Helix creature from coming to Earth.

Twenty years ago Bloodstone met and married a woman named Elise, who adopted his last name. Eventually Elise gave birth to his daughter Elsa. Ulysses and Elise separated when Elsa was two years old. Ulysses distanced himself from both, and Elsa never knew him as she grew up. Bloodstone trusted Adam to give his daughter Elsa a fragment of the Bloodgem in a choker when she was old enough. After Ulysses left, Elise and Elsa traveled across Europe. Eventually they settled in England, where Elsa schooled. Elsa began to have increasingly frequent dreams about monsters, such as vampires. Eventually she and her mother learned of Ulysses' death, and they flew to Boston to settle his estate.

Elsa and Elise arrived at Bloodstone House, where they were given a tour by the executor of Ulysses' estate, Charles Barnabas. Exploring the house, Elsa discovered a secret chamber, in which she encountered Adam, the Frankenstein Monster, who told her about her father. Adam gave her the Bloodstone Choker, which attached itself to her neck. She then grabbed a flashing lamp, and when she wished she knew why it was flashing, she was transported to Bosnia, into the midst of a struggle between Dracula and the Nosferatu.

Dracula recognizes the Bloodgem fragment and attacked Elsa, but is blasted away by the Bloodstone Choker. Dracula was then impaled by the Nosferatu, who took him away, while Adam returns Elsa to Bloodstone House. Adam later designed a costume for Elsa, patterned after her father's. The two then had the lamp transport them to Egypt, where they meet N'Kantu, the Living Mummy. Elsa later confronts Nosferatu himself, who bites her but is destroyed by the Bloodgem energy in her blood. She and her allies free Dracula who then exposed the Nosferati to sunlight, destroying them.

Elsa lived in Bloodstone Manor with her mother and ally Adam the Frankenstein Monster, she had befriended Charles Barnabus a pureblood vampire lawyer and executor of the Bloodstone estate. Pursuing a monster-hunting occupation, she began an online blog to create an electronic encyclopaedic reference guide for the numerous monsters and alien beasts in the world.

According to Elsa, she had some of the Bloodgem power via a genetic inheritance from her father, and it was present in her blood, indicating that she didn't only gain power via the Bloodstone Choker, but was born with power. She has an unspecified level of super strength, she has demonstrated immunity to vampire bites, her blood will destroy a vampire if consumed, the original Bloodgem fragment itself was an anathema to vampires.

An expert at most forms of firearm and melee weapon.

Retrieved from "https://marvelcomicsfanon.fandom.com/wiki/Elsa_Bloodstone_(Earth-1010)?oldid=168299"
Community content is available under CC-BY-SA unless otherwise noted.