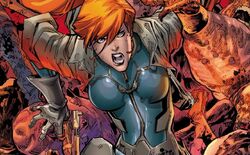 Earth-101
Base Of Operations
Her Van
Characteristics
Gender

Which monster do I get to kill next?

Ulysses Bloodstone was an immortal mystical being who wandered the Earth and eventually fell in love with a mortal villager named Elise, siring a daughter. They named her Elsa, and when she was only 9-years-old, a werewolf mauled her mother to death. It was then that her father told her the truth and began to train her how to defend herself and hunt monsters. She grew up traveling the world, killing as many monsters as she could.

Eventually, her father succumbed to the life they lived, and she swore to continue his work. This eventually led to her crossing paths with Doctor Strange and the Masters of the Mystic Arts, who she formed an alliance with to fight AIM, who was using the Dark Dimension to create land sharks. When AIM was defeated, Elsa took ownership of one of the land sharks named Jeff, but was forced to relinquish him into the care of the Scarlet Witch after realizing her life was too dangerous to support him.

She eventually crossed paths with a fellow monster hunter named Jack Denver, who had worked with Blade and had a grudge against vampires. The two began working together to cleanse the world of monsters, and eventually formed a relationship.

[[Category: In a Relationship with Jack Denver Characters]]
Retrieved from "https://marvelcomicsfanon.fandom.com/wiki/Elsa_Bloodstone_(Earth-101)?oldid=250127"
Community content is available under CC-BY-SA unless otherwise noted.