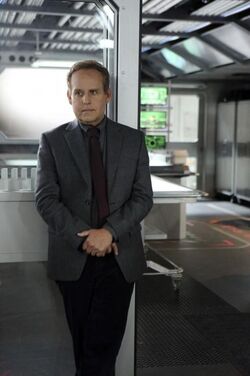 The Berserker, The Warrior Who Stayed
Identity

I was a mason. I broke rocks...for thousands of years.

The Asgardian that would come to be known as Elliot Randolph was a stone mason for thousands of years before being recruited for a military mission to Earth in the 12th century. Tired of his mundane existence in Asgard and desiring to travel the Realms, Randolph signed on.

While on Earth, Randolph served with the Asgardian Berserker Army, who gained superior strength, even by Asgardian standards, by touching a device known as the Berserker Staff, which brought all of the rage and hatred that the wielder keeps suppressed and transforms it into strength.

During his time on Earth, Randolph fell in love with the planet and its people, and when the rest of the Asgardian host returned home, Randolph stayed behind. The Berserker Staff was left behind as well. Randolph, who now considered himself a pacifist, did not want the staff or the power it possessed. Fearing that the dark magic of the staff would fall into the wrong hands, he broke the staff into three pieces and spread them in various places across Europe. He hid one in a tree in what would become the Trillemarka National Park in Norway, one in a crypt in Seville, Spain and the final piece in a church in Ireland.

Randolph had lived on Earth for several centuries when, in the year 1546, he met and fell in love with a French girl. He told her his story and her brother, who happened to be a priest, wrote the story down and created the legend of "The Warrior Who Stayed."

By the 21st Century, Randolph had taken up the guise of a human professor of Norse Mythology at the University of Seville. When S.H.I.E.L.D. discovered the Asgardian weapon Mjølnir in the desert of New Mexico, Agent Phil Coulson called upon Randolph for a consultation.

Two years later, when the piece of the Berserker Staff that Randolph hid in Norway was found by a Norse Paganist Hate Group, a search began for the final pieces and Phil Coulson again consulted with Randolph. Coulson interrupted Randolph's meeting with a student named Elena and asked Randolph about the staff. He explained the history of the staff, even commenting on the legend of the Warrior who stayed, but decided not to reveal his own connection to the staff.

Recognizing what they were searching for and the dangerous power it held, Randolph attempted to gather the pieces of the staff before either S.H.I.E.L.D. or the neo-Norse pagans could. He found the second piece in the underground catacombs in Spain, but before he could escape he was discovered by Agent Grant Ward. When Ward tried to arrest Randolph, he accidentally touched the staff which triggered a deep rage inside Ward, Randolph used the opportunity to make his escape with the staff.

As Randolph made his hasty escape, he bumped into Jakob Nystrom by mistake, unaware the Nystrom and his friends were the Neo-Norse Pagans he was hiding from. The Pagans cornered Randolph and threw his car across the road in a show of force. Unfortunately, Randolph did not wish for his identity as an Asgardian to be revealed and as a result could not keep the staff piece out of the hands of the pagans, and was soon found by Phil Coulson and his team. Randolph offered no explanation or resistance and was taken into custody by Coulson's Team.

It was just a chance to uncover something the gods brought down from the heavens."
"Aliens brought it. From space.

Randolph was put in the Cage onboard the Bus and interrogated by Phil Coulson and Grant Ward. Randolph hid his true intentions behind finding the Berserker Staff, claiming that as a professor he had simply wanted to be the one to find and examine the staff before anyone else. Seeing they were getting nowhere in their interrogation, Coulson and Ward took a short break from the questioning.

Grant Ward returned a few moments later, still clearly filled with rage after touching the Berserker Staff. Ward asked Randolph how to fix what the staff had done to him but when Randolph refused to answer, Ward attacked him with a knife. Randolph calmly used his Asgardian strength to bend the knife with ease before Phil Coulson revealed he had deduced that Randolph was the legendary Asgardian "Warrior Who Stayed". Coulson got Randolph to cooperate after threatening to reveal his Asgardian origins to the world.

As the team flew to Ireland, the location of the final piece of the Berserker Staff, Randolph was approached by the still agitated Grant Ward, who continued to struggle to cope with the side-effects of touching the powerful staff. He asked Randolph how long the effects of the staff last, which Randolph compared to a burning sensation in the gut filled with all your hate and rage. Randolph told him that the staff works differently on humans compared to its effect on Asgardians but the effects should ware off in a few months to a years time, which did not seem to comfort Ward, but they continued with their mission regardless.

Am I dead?"
"Apparently not.

Randolph led Coulson's team to the church in Ireland where the final piece was hidden, explaining to them how the monks of the church had kept a vow of silence to protect his secret. Before they could find the staff piece however, they found that the Paganists had beaten them there and Jakob Nystrom stabbed Randolph through the heart with a staff piece.

While Grant Ward attacked Nostrum and crew of Neo-Norse Pagans, Coulson called upon Jemma Simmons to try and find a way to save Randolph's life, although Simmons was unsure how to deal with an Asgardian body. Agent Coulson grabbed Randolph's heart and physically pumped it, managing to keep him alive long enough for his advanced Asgardian physiology to heal itself. While this happened, Agents Grant Ward and Melinda May utilised the staff to take out the Paganisms. When Randolph awoke, fully recovered from his near death experience, his first comment was to Jemma Simmons, calling her the most beautiful thing he had seen in a thousand years, which made her blush.

You are easily the most beautiful thing I've seen in a thousand years.

Afterward, S.H.I.E.L.D. took the Berserker Staff into its possession and Randolph decided that given Europe's new fascination with all things Asgard that it was perhaps time for him to move on. Coulson recommended that he move to Portland, Oregon, and agreed to visit him there.

Well, Asgardians can generally hold their drink; just one night, I tried to hold all of the drinks.

One night while living in Norway, Randolph went drinking and decided to challenge his Asgardian body with how much alcohol he could consume. A few hours of non-stop drinking later, Randolph was arrested for public drunkenness and destruction of property. Despite being put in a jail where he could easily escape, Randolph decided not to break free as he heard more reports on government agencies hunting down people with powers.

I'd have no problem contacting those task forces you mentioned; I bet they'd go bonkers to have a real life Asgardian to dissect in their labs. I don't know how comfy you'd be there."
"Why Agent Coulson, are you threatening me?

While comfortably spending time in his prison cell in Norway, Randolph was visited by Phil Coulson and Leo Fitz who asked for his assistance in studying an ancient Monolith which had sucked Jemma Simmons through a portal to another world. Randolph refused as he claimed that he would rather keep his Asgardian identity a secret from the already fearful public; however, when Coulson threatened to call the ATCU on him, Randolph was left with no choice but to agree. Randolph ripped the bars from his cell and walked out, blaming the damage on Coulson when the guards arrived.

Returning to the Playground, Randolph looked over the Monolith, shocked to see it change from solid to liquid and back again. Randolph questioned why they had come to him for advice as he claimed not to know about the scientific research into travelling through space and time, but Coulson made it clear that he knew he had. Randolph admitted he had come to confirm its existence and destroy it, but Leo Fitz threatened him if he tried, so Randolph agreed to help to get Jemma Simmons back if they destroyed it afterwards. The team showed Randolph a piece of paper with links to the Monolith and Randolph recognised the words from a castle he had visited hundreds of years ago and recommended they go to England to investigate.

You're certain about this? It does say death by punishment.

Upon arriving at the castle in England, Randolph began to reminisce about the costume party he had attended and what he had learned during it. He pointed out the cravings on the walls which allowed Phil Coulson to discover a secret doorway, leading to another room filled with ancient equipment and a hole in the floor which seemed to be used to test and activate the Monolith.

Seeking to understand the stone and what happened in this room more, Coulson called Alphonso Mackenzie and requested that he fly the Monolith to their location. Once it was put in place, Leo Fitz activated the machine which caused the room to vibrate and the Monolith to transform to liquid; however this was only brief and the machine seemed to break before long. A second experiment was conducted this time with Daisy Johnson using her vibration powers to open the portal allowing Fitz to jump inside. Before long the portal exploded and Fitz reappeared with Jemma Simmons.

Learning of the Inhumans

Agent Coulson, what exactly is Daisy?"
"They call themselves Inhumans."
"I have not heard that word in a very long time.

Amazed by what he just witnessed, Randolph approached Phil Coulson and asked him what exactly was Daisy Johnson to have exhibited such power. Coulson explained that Johnson was a member of the Inhumans. Randolph's curiosity grew deeper, remembering that, though he had been on Earth for centuries, he had not heard that word in a long time.

As an Asgardian, Randolph possesses superhuman physical attributes such as strength, stamina, speed and reflexes.

Retrieved from "https://marvelcomicsfanon.fandom.com/wiki/Elliot_Randolph_(Earth-1010)?oldid=124293"
Community content is available under CC-BY-SA unless otherwise noted.