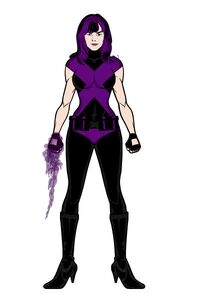 Dr. Braddock set up home in Braddock Manor and became one of the United Kingdom's leading robotics mechanics expert. Ellijabeseu's mom is the daughter of a previous rich South Korean diplomat, ambassador to the UK. Lady Erizabesu and Lord James met at an opera in London while Lady Erizabesu's family were on vacation with their father.

While Betsy's father took on a career of advanced robotics mechanics and artificial intelligence, Betsy's mom was a stay at home mom who raised her children in Kuk Sool Won and various other Korean martial arts techniques, which includes armed combat. Betsy's mom was raised by her father in this fashion, which Betsy's mom wanted to pass on to her children. Betsy's mom throughout her lifetime mastered various arts including Kuk Sool Won. Lady Erizabesu passed on a mixture of these martial arts to her children. For this reason, Betsy was no stranger to martial arts later in her X-Men career. Around the age of 7, Betsy decided that she wanted to go into dancing. By the age of 12, Betsy became a phenomenon throughout London. She seemed to learn to move her body in the ways that she mentally pictured.

By the age of 14, she started to receive offers for a modeling career. She signed on with an agency. She took the UK, and then Europe by storm. She eventually decided to make herself stand out by dying her hair purple. By the age of 15, she was famous throughout the western world. She began guest appearing on numerous British and American television series. Throughout her travels, her mom and brother, Brian, went with her to keep up their martial arts training and private studies.

After arriving back in London following a job in Paris, she, Brian, and her mother were walking to a nearby hotel where they planned on staying the night before heading home. While passing an alleyway, Betsy was suddenly grabbed and pulled in with one of the assailant's hands covering her mouth. "Helllloooo beautifulllll," said the assailant. "I can't wait to have my way with one of the hottest, youngest superstars." Betsy panicked for a few seconds before regaining her composure. Suddenly the assailant was pushed off of her as if by magic. Betsy then looked down to find a purple aura glowing around her hands. By thought, they took the form of two knives. She was at first stunned, but knew she should take this to her advantage in combat. The assailant rushed at her, but Betsy used his momentum against him by causing him to run into the wall. She then stretched her hand towards his head. A psionic knife then passed through his head, and he became unconscious. Betsy then ran out of the alley to find her family looking for her. She told them about the assailant, and how she escaped with her martial art training without mentioning her newly discovered gift.

She continued living her normal day life when Brian and Sharon Xavier showed up on her doorstep. They explained to her that they were pioneers in a new branch of genetics. They explained to her their theory of mutation and the X-Gene. Betsy came to believe in them, and allowed them to run some tests with her. They visited her semi-annually for the next few years. At the age of 18, a young man named Charles Xavier showed up on her doorstep. He explained to her that his parents had recently died, and he found their research. Charles gave her an offer to join him at his new school for mutants, the Xavier Institute. She was devastated by his parents death, and decided that it was in her best interest to join him. Betsy then became one of the members of the first generation of X-Men (what Xavier called his parents' "X-Men", a nickname that they had given their patients).

Betsy possesses the normal human strength of a woman her age, height, and build who engages in intensive regular exercise. She can increase her strength by bolstering it with her telekinetic ability.

Retrieved from "https://marvelcomicsfanon.fandom.com/wiki/Ellijabeseu_Braddock_(Earth-515)?oldid=253233"
Community content is available under CC-BY-SA unless otherwise noted.