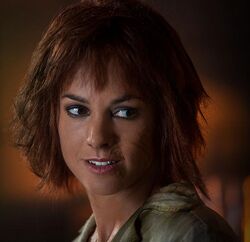 You don't intimidate me. I've dated hotter chicks than you.

Ellen Brandt was an amputee, missing her lower left arm, when she was approached by Aldrich Killian to trial the experimental Extremis virus. She endured the pain of the infusion long enough for her body to accept the compound, and watched it regrow her missing limb. A fellow trial subject was not so lucky, and exploded in her vicinity, yet Brandt was able to recover and subsequently entered into the service of Killian.

One of Brandt's assignments was to recover a set of documents from a small town bar, documents that detailed the death of another Extremis subject in that area. When she arrived, she found that Tony Stark had arrived and had inadvertently collected them already. Brandt, posing as Homeland Security, and a fellow agent attempted to apprehend Stark, but ultimately failed. Even without his armor, Stark was able to outsmart the Extremis-empowered agents and he killed Brandt with a clever combination of gas and accelerant, ignited by Brandt's own power.

Extremis virus: The Extremis virus injected into living tissue results in a wide range of effects within the host organism. The intention of Extremis was to enhance, although the compound was flawed. In all hosts it causes intense pain until it either bonds with the host successfully, or destroys the host in a violent explosion. Even in cases where the Extremis virus has successfully bonded, the host organism may be at risk of the compound becoming unstable and detonating with sufficient force to burn nearby bystanders to dust, and crater solid concrete underfoot.

Retrieved from "https://marvelcomicsfanon.fandom.com/wiki/Ellen_Brandt_(Earth-1010)?oldid=167880"
Community content is available under CC-BY-SA unless otherwise noted.