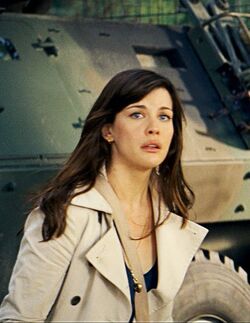 Five years prior to the events of the Culver University battle, Betty Ross was working at Culver University as a cellular biologist. She was Bruce Banner's girlfriend, and she was assisting him with the Gamma Pulse experiment that resulted in the unintentional creation of The Incredible Hulk. An accident in the lab caused Betty to be hurt and taken to the hospital. When she awoke, she found that Bruce had already left. Bruce later quit his job and left in search of a cure to his unwilling transformation. When Betty returned to work, General Ross had all of her work and data on the Gamma Pulse experiment taken away, but she had already made a back-up in case Bruce would ever come back.

Bruce eventually returns to Culver University, but not with the intentions to meet her. She however sees him, and forces him to stay the night, and gives him the data he required. The next day before Bruce left, Leonard Samson informs Gen. Ross of his presence, a battle ensues after Bruce is forced to transfer into the Hulk. During the battle, Hulk is shown to connect with Betty at multiple levels, as he realizes that she is the only one not wanting to hurt him. This results in his anger increase when he sees Betty being pressurized by Army Soldiers. With the fight over, Betty goes near him, being the only one who was not hurt near his presence. Hulk ensures her safety when a helicopter crashes upon them, and takes her in the mountains, where upon gaining conscience, she connects with the Hulk someone had never before, involving sitting beside him and holding his hand. Due to his calmed condition, Hulk changes back to Bruce overnight.

Later, the pair stays at a motel for some time, and sexual tensions follow, where Betty apparently wanted to have the connections with Bruce, but he pulled back, as it excited him to the level which might change him back into the Hulk. Leaving every traceable things behind, Betty sells her mother’s last remembrance; a necklace; for the pair to travel to New York, and meet Dr. Samuel Sterns (Mr. Blue), a close ally of Bruce. Bruce underestimates the track on him, and his email to Mr. Blue is tracked by S.H.I.E.L.D., who then responds to the U.S. Army and Gen. Ross.

In New York, Dr. Sterns experiment an antidote on Bruce. During his transformed state, the Hulk is at the verge of destroying the laboratory, only to be controlled by Betty, whose interaction and soothing words to the Hulk makes him control his anger and change back to Bruce, their by, making the anti-dot work.

U.S. Army intervenes, arrests Bruce and takes the pair back. On their way, Army Soldiers report them that the ‘Hulk’ is in the streets. Gen. Ross, Bruce and Betty realize that he is Emil Blonsky. Bruce request Gen. Ross to let him try to stop him. A battle follows, in which The Hulk falls weak in front of a now improved Blonsky, only to beat him when Blonsky’s action endanger Betty’s life. After beating him, Hulk and Betty share a peaceful moment together, in which he calls her name, and then flees before getting arrested.

Later, Bruce, now in hiding at Bella Coola, British Columbia, manages to retain Betty’s necklace, and arranges it to be sent back to her.

Retrieved from "https://marvelcomicsfanon.fandom.com/wiki/Elizabeth_Ross_(Earth-1010)?oldid=125683"
Community content is available under CC-BY-SA unless otherwise noted.