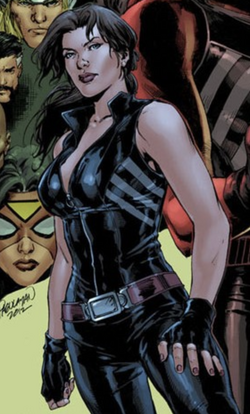 We're all monsters on the inside.

Betty was raised in a very militant nature by her father, General Thaddeus Ross, who always pressured her to be the best she can be. This led to her becoming a gifted scientist, and she eventually came to work alongside Bruce Banner.

While working on a military project to recreate the Super-Soldier Serum, the two of them fell in love. However, just as they were nearing a breakthrough, the government cut their funding and Bruce was fired. Betty then discovered that Bruce had injected himself with the Serum, and mutated into the Hulk.

He was then forced to go on the run, as Betty's father began conducting a manhunt for him. For the next several years, Betty would try and help Bruce remain undetected, but grew tired of the constant heartbreak and tried to move forward with her life. Eventually, when the Hulk resurfaced as a member of the Avengers, Betty tried to reach out to him.

They were happy to see each other once more, but soon realized the love they once shared was long gone. But even still, Betty had become inspired by the Hulk's turn to heroism, and offered her services as a scientist to S.H.I.E.L.D. She began working closely with Phil Coulson's team, and eventually Melinda May decided Betty needed to go through combat training. Eventually, Betty began to excel and was even placed on the Secret Warriors.

Retrieved from "https://marvelcomicsfanon.fandom.com/wiki/Elizabeth_Ross_(Earth-101)?oldid=250728"
Community content is available under CC-BY-SA unless otherwise noted.