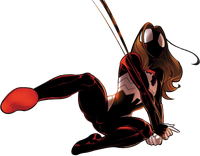 Elizabeth Reilly was born to Scarlet Spider (Ben) and Gwen Stacy. Although, Gwen thought that Ben was Peter at the time. After the child was born, Ben confessed that he was nothing more than a clone of the one she loved. But with Peter seeing someone else, she decided she could accept that her lover was not "an actual person." Liz was raised in a healthy home, with parents who loved each other. Her childhood was fairly normal, because she didn't know that her father was Spider-Man and the Scarlet Spider.

One day, Liz started spurting webs from her hands, and she ran straight into a wall, which she then climbed. She asked her dad why this was happening to her, and he walked up on the ceiling with her and revealed the truth. Then she began obsessively collecting articles involving every spider-related super-hero there was. She tried to hide her powers, and she began begging her dad for an image inducer. She withdrew from her friends and became a very distant person. Neither of her parents could figure out what was wrong with her.

Then a news reel came on showing that the Avengers had been captured by the Super-Skrull army. She would have ignored it, had not her dad pointed out that there was something she could do. She argued that she didn't want anyone to know she had powers, and he argued that there was more at hand than her. He stated that she was very powerful, and that the world currently needed that power, now more than ever. She grudgingly accepted, making a costume, and stealing an image inducer. Scarlet was disappointed that she wouldn't be willing to go as she was, but he was proud of her for helping. Then she took off, to join the Avengers and save them from the Skrulls.

Since her father is a clone of Spider-Man, Elizabeth inherited all of his powers.

Super-Strength: Arachne can lift up to 15 tons without injury.

Super-Stamina: Arachne can fight for hours at peak condition.

Super-Agility: Elizabeth is twice as flexible as the average human.

Spider Sense: Elizabeth is pre-warned of danger by a Spider-Sense that can warn her from anything dangerous. It is also developed to the point where she can see up to 1 day into the future.

Wall-Crawling: Elizabeth can stick to any surface.

Organic Webbing: Arachne can shoot webbing from a small hole in her vein.

Experimentation Results: In an odd mutation, Elizabeth can assume the powers of every Spider-clone ever created.

Mark of Kaine: Elizabeth can burn others with an energy handprint.

Telepathy: Elizabeth has a mild form of telepathy allowing her to communicate with and control spiders.

Stingers: Arachne can eject 2 talons from the back of her hands, made of bone.

Molecular Bodily Control: She can turn into liquid, BECOME her webbing, stretch and elasticate her body, or morph into weapons.

Arachne has good combat knowledge due to being taught by her father.

Equipment: Arachne carries her dad's impact webbing and stingers on her at all times.
Transportation: Web-slinging
Weapons: None known.

Retrieved from "https://marvelcomicsfanon.fandom.com/wiki/Elizabeth_Reilly_(Earth-1175)?oldid=255405"
Community content is available under CC-BY-SA unless otherwise noted.