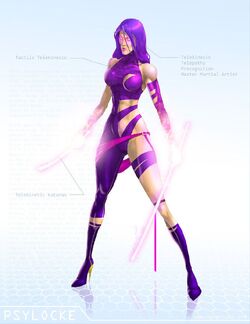 I'm going to enjoy peeling your skin off slowly to see what really makes you tick.

Elizabeth Braddock grew up in Europe raised by her older brother, Brian, who never developed mutant powers like she did. For a time, she worked for MI-6, who made use of her psionic mutant abilities, but later broke off and became a bounty hunter. This put her on Apocalypse's radar, who recruited her to become his Horseman of Conquest, increasing her power indefinitely.

She instantly grew to love this newfound power and control being a Horseman gave her. She became deathly loyal to Apocalypse, and to her commander, Archangel. She holds a very high position in the Armada, like all Horsemen, and enjoys bossing around and torturing the lower level soldiers.

Retrieved from "https://marvelcomicsfanon.fandom.com/wiki/Elizabeth_Braddock_(Earth-9999)?oldid=253243"
Community content is available under CC-BY-SA unless otherwise noted.