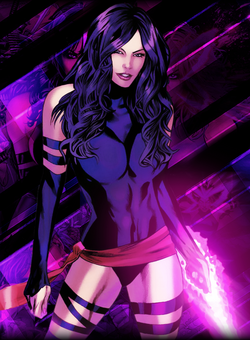 Psylocke's history is identical to that of her Earth-616 counterpart up until Juggernaut was launched into space by Skaar. He landed in the backyard of her Lake House in England. She and Brian helped nurse him back to health, after which time, Juggernaut decided he owed them a favor after remembering serving alongside them in Excalibur. Brian enlisted him as an American-based agent of MI-13.

Psylocke is supposedly an Omega-level mutant, thanks to her vast telepathic powers, on par with Jean Grey and Charles Xavier. She was later stated to be the third most powerful telepath on Earth (without counting Stryfe).

Telekinesis: Ability to psionically manipulate and control the physical aspects of reality. She can also move and levitate other people. While she can move objects from a distance and fly as other telekinetics do, she has shown little inclination to do either in combat situations. She can also create telekinetic shields of various sizes and strength. Her telekinesis is also much stronger now than it was before her death. Psylocke at first seemed to find that using her telekinesis in forceful ways was easier than in delicate ways (i.e. shattering a brick wall proving more easy than levitating a pencil across a room). However, over time she displayed further control over fine matter.

Telepathy: She possesses mental powers to affect and manipulate the minds of other sentient beings. Psylocke can read minds and communicate mentally with others over long distances. When she telepathically communicates with another person over a distance, that person often perceives her presence as a butterfly-like image bearing large eyes on its wings.

Elizabeth is a master of telepathic and telekinetic combat, as well as martial arts.

Retrieved from "https://marvelcomicsfanon.fandom.com/wiki/Elizabeth_Braddock_(Earth-858)?oldid=253232"
Community content is available under CC-BY-SA unless otherwise noted.