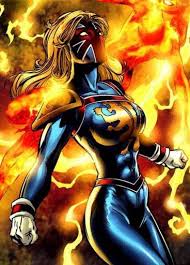 Earth-6785
Base Of Operations
The Outside
Characteristics
Gender

If you are not willing to make the ultimate sacrifice, then you have no right to call yourself a hero.

Betsy Braddock grew up in the shadow of her twin brother, Brian. When he was chosen by the British Government to become the hero Captain Britain, she resigned to the fact he will always come first. However, things changed when the experiment went horribly wrong, crippling Brian forever. Betsy then went off the grid and created an arsenal of weaponry to style herself as Captain Britain, the patriotic vigilante known to the citizens of Britain only in legend. Her reputation would proceed her when she found herself often teaming up with hero teams like the Avengers and the X-Men.

Betsy was recruited into the Outsiders under the promise that if she returned to her home reality, her greatest enemy, Arnim Zola, would discover her identity and murder her brother.

Captain Britain unfortunately served a very short tenure with the Outsiders, only participating in three missions, the third of which she would end up sacrificing her own life to complete the mission and ensure that that reality's Captain America did not sacrifice himself during World War 2. She accepted the responsibility while the other Outsiders argued on how to complete the mission and knocked Captain America unconscious, taking his place in the Hydra plane rigged to explode, dying over the Atlantic Ocean after sharing last words with her teammates.

Same as every normal human being

Retrieved from "https://marvelcomicsfanon.fandom.com/wiki/Elizabeth_Braddock_(Earth-6785)?oldid=244503"
Community content is available under CC-BY-SA unless otherwise noted.