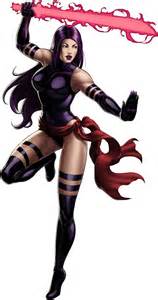 Purple, (current body),
Blonde (dyed Purple) (Original body)
Unusual Features
Formerly had a red tattoo over her left eye after gaining Crimson Dawn powers. Originally, she had the body of an English woman, but after Revanche's body switch, she now has the body of an Asian woman.
Status
Citizenship

Little is known about Psylocke's life before the Masters of Evil attack on the S.H.I.E.L.D. Alpha Helicarrier.

Psylocke was one of the members of the X-Men and assorted other heroes who were not members of the Ultimate Alliance who attempted to fight an Odin powered Doctor Doom. Despite her best efforts, Psylocke was easily defeated by the god-powered villain, and she was corrupted with Doctor Doom's powers. Transformed into the new "Dark Psylocke", Betty Braddock became fanatically loyal to her new master, and aided her fellow dark X-Men in attacking the Ultimate Alliance when Uatu the Watcher sent them back to Earth. Once again, Braddock was defeated in combat, but this time she was freed of Doctor Doom's control.

A few years later, Psylocke joined with Nick Fury's secret Strike Force into Latveria, where she helped infiltrate Lucia von Barda's castle as a member of Bravo Team. After a cyborg von Bardas attacked New York and the actions of the Strike Team were revealed; Braddock continued to work alongside the Ultimate Alliance until the Superhuman Registration Act was passed and split the team down the middle. Psylocke would later help the rejoined Alliance battle the Nanite Fold.

Psylocke was a participant of the Secret Invasion along with the Alliance against the Skrulls.

Equipment: None known.
Transportation: Blackbird, Quinjet
Weapons: Psylocke currently carries a katana named Shurayuki. She can focus her powers to create a psionic Katana or a crossbow. Psylocke also carried and employed a pair of katana as well. Psylocke can kinetically charge weapons with psionic energy, when charged, her weapons glow purple.

Retrieved from "https://marvelcomicsfanon.fandom.com/wiki/Elizabeth_Braddock_(Earth-6109.2)?oldid=253230"
Community content is available under CC-BY-SA unless otherwise noted.