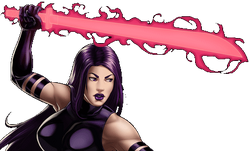 Sir James Braddock was a denizen of Otherworld, an other-dimensional realm. Merlyn sent James to Earth to father the champion, who would be known as Captain Britain. Arriving in England, Dr. Braddock became one of the United Kingdom's leading research scientists. James soon married and set up home in Braddock Manor. There, James created a highly advanced supercomputer he named Mastermind. Dr. Braddock and Mrs. Braddock had three children, Jamie Braddock Jr. (the eldest), and twins Brian and Elizabeth Braddock. When Betsy and Brian were in their early twenties, their parents were killed in an explosion, in Dr. Braddock's laboratory, caused by the malfunctioning computer Mastermind.

Brian Braddock pursued post-graduate studies in Physics at Thames University, while Betsy worked as a charter pilot. Soon after Brian became the hero Captain Britain, Betsy alerted him that their brother Jamie had been injured, while testing his racing car in the grounds of Braddock Manor, apparently an attack rather than an accident. Betsy flew Brian back to the Manor, but their plane was downed as they neared the crash by the psychic powers of Dr. Synne; luckily both inside survived the crash. Dr. Synne subsequently mind controlled Betsy into seeing her brothers as hideous monsters, causing her to attack them, but they managed to overpower her.

Betsy was taken to the nearby Morder Research Centre for treatment, unwittingly delivering her into the hands of one of Synne's agents, Dr. Ramsey. When Brian managed to defeat Synne, things only worsened. Freed of Synne's mind control, Ramsey reverted to his true allegiances as an agent of the Nazi Red Skull, taking both Betsy and Jamie as hostages. Both were subsequently freed by Captain Britain and his new ally, Captain America. It was after this that Betsy experienced her first reported psychic incident (there may have been earlier, unreported ones, but Synne's mind control appears to have unlocked her psychic potential, allowing it to start to grow). Betsy had a precognitive dream warning her of Brian's peril fighting the mad Lord Hawk.

Betsy quit the charter business and took up modeling. Some time later, with her psychic powers growing and after Brian had departed overseas to continue his studies, Betsy made mental contact with a S.T.R.I.K.E. Psi agent (S.T.R.I.K.E. being Special Tactical Response for International Key Emergencies, the U.K.'s equivalent of the U.N.'s S.H.I.E.L.D. agency), and was soon recruited by Agent Matthew (later renamed Gabriel), with whom she pursued a brief romance. Betsy subsequently became the lover of fellow psi, Tom Lennox. Maintaining her modeling career as a cover, at one point, Betsy attempted to infiltrate the Hellfire Club, where her father had been a member of the London Branch's Inner Circle, holding the position of Black Bishop, for S.T.R.I.K.E., but was warned off by Tessa. Betsy had lost track of her brother for many years while he was adventuring in America and other dimensions, but he returned in time to save her life when she and her fellow S.T.R.I.K.E. Psi's were targeted for assassination by Slaymaster, who had been hired by the crimelord, Vixen, to cover her takeover of the agency. Betsy, Tom, and the sole other survivor of the Psi Division, Alison Double, sought refuge with Brian in Braddock Manor, but had to flee there after a battle between Brian, his allies (the Special Executive), and the hero killing, extra-dimensional, cybiote the Fury.

With the insane mutant reality-warper, Mad Jim Jaspers, taking over the country, the group sought to hide out in London. While in London battling Crimson Dynamo, Betsy shared a intimate night with Hercules. Later, Tom was killed and Betsy and Alison captured by government forces. The two women ended up in a concentration camp until Jaspers' reign was brought to an end, partially through the efforts of her brother. Betsy, who had been in mental contact with Tom when he died, met and convalesced under the care of Victoria Bentley, an old friend of Dr. Strange and the Black Knight, at the camp and Victoria not only helped her heal, but taught her to harness the trauma she had felt, using it to develop and strengthen her psi powers.

Betsy was kidnapped from the Alps by Mojo and Spiral and surgically given artificial eyes, restoring her sight. Mojo had mentally controlled Betsy, named her Psylocke, and had her star in a popular new show, the Wildways, using her to capture children around the world to join his junior team show, Bratpack. Betsy set free from Mojo's control and started working as a bounty hunter, working for whoever paid best.

Psylocke is a mutant. She is now supposedly an Omega-level mutant, thanks to her vast telepathic powers, on par with Jean Grey and Charles Xavier.

Telekinesis: Ability to psionically manipulate and control the physical aspects of reality. She can also move and levitate other people. While she can move objects from a distance and fly as other telekinetics do, she has shown little inclination to do either in combat situations. She can also create telekinetic shields of various sizes and strength. Her telekinesis is also much stronger now than it was before her death. Psylocke at first seemed to find that using her telekinesis in forceful ways was easier than in delicate ways (i.e. shattering a brick wall proving more easy than levitating a pencil across a room). However, over time she displayed further control over fine matter.

Telepathy: She possesses mental powers to affect and manipulate the minds of other sentient beings. Psylocke can read minds and communicate mentally with others over long distances. When she telepathically communicates with another person over a distance, that person often perceives her presence as a butterfly-like image bearing large eyes on its wings.


Psionic Immunity: Psylocke has been shown to have an immunity to certain psionic attacks such as; mind reading, mental attacks, and telepathy.

Master Martial Artist: Psylocke has been classified as a master martial artist, though the specific fighting arts she has mastered have never been revealed. Presumably, as a ninja, she is skilled in various Ninjutsu techniques such as Taijutsu and Kenpo. Even though she is known as a ninja and worked for The Hand as one, her fighting skills and techniques far surpass those of the average Hand Ninja. Her skills have been said to rival those of a ninja grandmaster(10th Dan level black belt or above). Psylocke is also very well versed in the use of all Ninja weapons, stealth methods, silent movement, infiltration, concealment, escape & evasion, covert methods, Ninja espionage, and Ninja acrobatics.

Master Telepathic Combatant: As a telepath, Psylocke takes advantage of her powers in a fight by reading her opponents' movements seconds before they make them, giving her the opportunity to counter-attack faster, and she can also use her telepathy to mask her presence from other people, humans and super-humans alike. She also creates telepathic illusions to distract her enemies while fighting them and as a ninja, she uses her psychic knife to incapacitate her opponents without killing them, though she has less inhibitions about doing so and will if necessary.

Advanced Telekinetic Combatant: As a telekinetic, she often uses her powers to augment her strength and speed, which made her fighting skills so strong that she was able to match and even outmatch other superhumanly strong opponents.

Betsy possesses the normal human strength of a woman her age, height, and build who engages in intensive regular exercise. She can increase her strength by bolstering it with her telekinetic ability. She can swing a 90 pounds ball with one hand.

The downside of her new powers is that the strength of her telepathic and telekinetic powers depend on how much she is using the other. Using two powers at once makes it hard for her to focus and lowers their level of power. For instance if she is using her telekinesis, her telepathy is limited to only reading and broadcasting thoughts and at the time, she is unable utilize her other telepathic skills.

Equipment: None known.
Transportation: None known.
Weapons: Psylocke currently carries a katana named Shurayuki. She can focus her powers to create a psionic Katana or a crossbow. Psylocke also carried and employd a pair of katana as well. Psylocke can kinetically charge weapons with psionic energy, when charged, her weapons glow purple.

Retrieved from "https://marvelcomicsfanon.fandom.com/wiki/Elizabeth_Braddock_(Earth-1010)?oldid=253229"
Community content is available under CC-BY-SA unless otherwise noted.