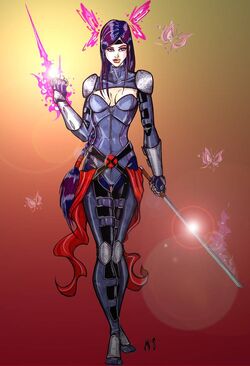 Would you like to die by the Adamantium blade... or the psionic one?

The younger sister of the crime fighter Lionheart, Elizabeth Braddock always wanted to be just like her older brother. When she reached puberty, the discovered her mutant abilities and instantly began training to become a hero.

However, once word of her powers spread, she was kidnapped from her home by the Hand, who began training her to become an assassin. She was eventually dubbed Psylocke, and eventually came into conflict with the X-Force member Wolverine, who convinced her the Hand was evil.

She abandoned the organization and went with Wolverine to Krakoa, where she was welcomed into X-Force. She then started using the resources to track down her family in England. After discovering her parents had been dead for years, she was able to reconnect with Brian, who had joined the British superhero team Excalibur. Psylocke then decided to start splitting her time between her new family with X-Force, and her old family as part of Excalibur.

Retrieved from "https://marvelcomicsfanon.fandom.com/wiki/Elizabeth_Braddock_(Earth-101)?oldid=253242"
Community content is available under CC-BY-SA unless otherwise noted.