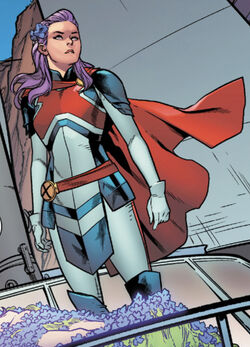 I will not let the nations of this beautiful world die in vain.

Betsy Braddock was once a gifted telepath, capable of creating psionic weaponry thanks to her genetic mutation. She went on to join the X-Men under the code name "Psylocke", whereas her brother, Brian, went on to become Captain Britain.

Both Braddock siblings participated in the siege against Thanos, but only Betsy made it out alive. However, she left with a scar, as she was one of the thousands of mutants that suffered being completely depowered by the power of the Infinity Stones.

Unwilling to give up the fight or let her brother die without purpose, Betsy took up the mantle of Captain Britain and joined the Resistance, taking claim over the Ebony Blade.

Retrieved from "https://marvelcomicsfanon.fandom.com/wiki/Elizabeth_Braddock_(Dimension_0)?oldid=264650"
Community content is available under CC-BY-SA unless otherwise noted.