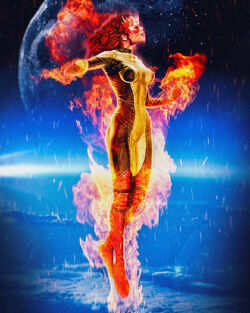 Sometimes I fantasize about lighting Spider-Monkey on fire, and I sleep better.

Liz Allen was recruited by Potts International right out of High School. She was put through the process of Terrigenesis and emerged with the ability to manipulate fire. She was dubbed "Firestar", and based out of Washington, D.C.

She eventually met the Squadron Supreme member, Spider-Monkey, and had a brief affair with him which resulted in her getting pregnant. Spider-Monkey then broke up with her and ceased all contact, leaving Firestar to raise her son, Davey, on her own. However, she did threaten legal action against Potts, who agreed to compensate her under the condition that she remains under their employ.

Retrieved from "https://marvelcomicsfanon.fandom.com/wiki/Elizabeth_Allen_(Earth-1515)?oldid=245810"
Community content is available under CC-BY-SA unless otherwise noted.