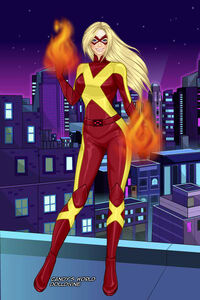 Being born to a loving mother and a deadbeat father associated with evil and an older sister questioning the existence of mutants leaving her younger sister to question herself until she finds the answer with some help. For Firestar/ Elizabeth Allan that was her lifelong struggle.

Liz was born the product of a one-night-stand between her mother and Franklin, The Blob. Due to Franklin's loyalty to the Brotherhood, he always stayed at Magneto's side. Because Mrs. Allan did not want to risk Franklin to associate his paternity to Liz. Liz had a phobia of mutants and super-powered beings, and she often worried that she herself was a mutant. Ironically, Liz herself was a mutant. Her powers manifested and were witnessed by her friends during a beach party. After the discussion with Professor X, she accepted that she is a mutant herself. She has the powers of Fire Manipulation She can produce flames on her body. When Liz joined the X-Men she took the code-name Firestar; made new friends with her teammates including Pyre.

She has the powers of mainstream continuity Firestar. She can produce flames on her body

Retrieved from "https://marvelcomicsfanon.fandom.com/wiki/Elizabeth_Allan_(Earth-16160)?oldid=242974"
Community content is available under CC-BY-SA unless otherwise noted.