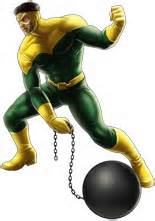 Little is known about Thunderball's life before the formation of the Masters of Evil. It can be assumed to be similar to his mainstream counterpart.

Thunderball and the other Wrecking Crew members (Wrecker, Piledriver, and Bulldozer) were among the Masters of Evil that attacked Asgard they were sent to guard the bridge leading to earth, but they were defeated by the Ultimate Alliance and placed in S.H.I.E.L.D. custody.

Thunderball possesses a genius level intellect and is a gifted strategist and physicist, specifically in the field of gamma radiation. He is also a formidable hand to hand combatant. He utilizes street-fighting techniques that enable him to make full use of his strength.

Equipment: None known.
Transportation: None known.
Weapons: Thunderball possesses a highly durable wrecking ball, altered because of exposure to the Wrecker's power, much in the same way as the Wrecker's crowbar. The ball is attached to a four foot long chain and is capable of projecting electrical energy bolts and an energized exoskeleton suit. The suit is only used when not in possession of his regular wrecking ball and superhuman powers. The wrecking ball, when thrown, is capable of returning to Thunderball in a similar fashion as Wrecker's crowbar and Thor's hammer. Thunderball has sufficient strength to spin the wrecking ball on it's chain fast enough to deflect bullets and automatic gunfire. By slamming the wrecking ball on the ground, Thunderball can cause minor localized quakes, knocking his opponents off-balance. It is also durable enough to be thrown into buildings and other structures, knocking them down with no damage to itself.

Retrieved from "https://marvelcomicsfanon.fandom.com/wiki/Eliot_Franklin_(Earth-6109.2)?oldid=167643"
Community content is available under CC-BY-SA unless otherwise noted.