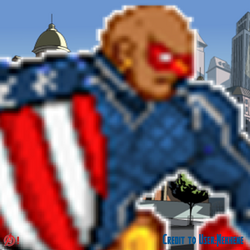 Eli Bradley has a family legacy of heroes. After losing the secrets of the Super Soldier Serum when Dr. Erskine, the United States Army still wanted to produce more Super Soldiers like Steve Rogers. To this end, Col. Walker Price and Dr. Wilfred Nagel took 300 African-American soldiers from Mississippi to experiment upon. Only a handful of men survived the gruesome process, and only one of them survived the covert missions and assignments: Isaiah Bradley, Eli's grandfather. His uncle, Josiah X, continued the family tradition, enlisting in Vietnam War. Later he even took up Isaiah's old Captain America uniform and join the Crew. Before Isaiah received the Super Soldier Serum, he fathered Sarah Gail, Eli's mother. Because of this Eli was born with no superhuman abilities.

After being hit by a car, Eli's grandfather gave Eli his blood. Since the transfusion, Eli has gained physical attributes and powers of a real Super Soldier.

Vision started the Young Avengers program. One of these recruits was Eli, who was believed to have been born with superhuman abilities. He lied to Vision, claiming to be a Super Soldier since birth. Wearing a costume very similar to that of Captain America's original sidekick, Bucky, Eli donned a full cowl and a set of five-pointed throwing stars as Patriot, and alongside his new teammates Hulkling and Wiccan, formed the Young Avengers.

After several weeks of training, the Young Avengers began taking on super hero missions. Their second mission was an attempted to save two hundred guest at St. Patrick's Cathedral when they were taken hostage during Susan Bishop's wedding. Unfortunately, the Young Avengers were only successful in starting a fire and becoming hostages themselves. It was a bridesmaid, Kate Bishop, that actually saved them using one of Patriot's own throwing stars. The Young Avengers were able, however, to escape the scene before the police arrived.

After the attack, at the hospital, Kate was approached by Cassie Lang, daughter of Ant-Man. Together the girls tracked down the Young Avengers at the Avengers Mansion, where the girls confronted the Young Avengers and invited themselves onto the team. To join the battle, Kate donned gear from the Mansion such as Mockingbird's Battle Staves and Hawkeye's Bow, who weren't at the Mansion by then. She also found the original Captain America's Shield for Patriot. After defeating Kang and saving the world, Kate and Cassie remained on as permanent members.

Artificially Enhanced Condition: Eli was originally born with no superhuman powers, after receiving a blood transfusion from his grandfather Isaiah, Eli's body mutated making him a true Super-Soldier with peak human abilities, including:

Retrieved from "https://marvelcomicsfanon.fandom.com/wiki/Elijah_Bradley_(Earth-1010)?oldid=171355"
Community content is available under CC-BY-SA unless otherwise noted.