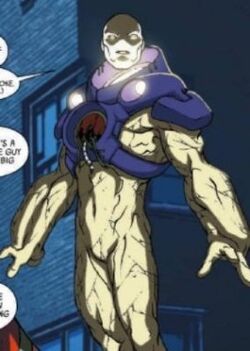 Do not call me Egghead.

Elias Starr always had a big head, both literally and figuratively. He considered himself to be the smartest man on Earth, and didn’t accept any criticism. That is why, when he was paired up to work with fellow S.H.I.E.L.D. Scientist Hank Pym, he had a meltdown and attempted to steal his work to pass it off as his own.

Starr was disavowed by S.H.I.E.L.D., but quickly wound up being recruited by AIM, where he attempted to continue working on his Quantum Tunnel. However, the experiment went horribly wrong, mutating his daughter, Ava, and destroying his physical body.

However, AIM was able to harvest his consciousness and implant it into an experimental android, dubbed Egghead. He began to consider himself too powerful for AIM to handle, and betrayed the organization, attempting to wreak havoc on them. However, intervention from the Avengers proved to be fatal. His outer body was destroyed after being hit by Thor’s hammer, Mjolnir, which effectively destroyed his consciousness.

Retrieved from "https://marvelcomicsfanon.fandom.com/wiki/Elias_Starr_(Earth-101)?oldid=250636"
Community content is available under CC-BY-SA unless otherwise noted.