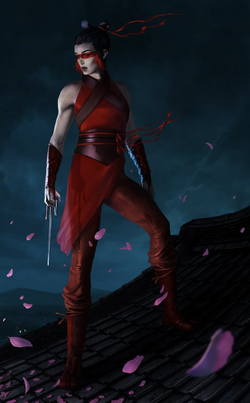 The She-Devil, The Black Sky
Identity

Oh, please, the notion of death being the end of life is such a binary way of thinking.

Elektra Natchios was born with the sole purpose of one day having her body repurposed to house the mythical Black Sky, an ancient deity worshiped by the ninja cult known as the Hand. However, she was kidnapped as a baby by a man named Stick, who raised her in seclusion with his rival ninja clan, the Chaste.

However, she eventually discovered her true purpose and decided to infiltrate the Hand in order to better understand it. While there, she was given the assignment of assassinating the vigilante Daredevil.

She tried, allying her sect with the Kingpin, but Daredevil proved to be a hard man to kill. Eventually, Daredevil and Elektra came to see each other for who they were outside of the masks and swords, and fell in love. But they were doomed for heartbreak, as Daredevil discovered she worked for the Kingpin.

She attempted to redeem herself by betraying the Kingpin and helping Daredevil bring him down, but the Hand had other ideas. The Kingpin’s personal assassin, Bullseye, was tasked with killing Elektra, which he did by driving her own sai through her heart.

While Daredevil believed Elektra was dead and gone, her body was taken by the Hand, who performed an ancient dark magic ritual and revived her body, melding her mind with the Black Sky. However, she proved unstable and uncontrollable, as she used her newfound status and power to murder her superiors and assume command of the Hand for herself.

The Hand was eventually opposed by the black ops group, the Thunderbolts. Most of Elektra's resources were taken out, and she was eventually confronted by Agent Venom and the Punisher. After an initial fight, the Punisher remembered he had had a run in with her in the past after working with Daredevil, and convinced Venom she could be a valuable member of their team. She put up a fight, but was eventually defeated and taken to the Raft, where she was evaluated by Nick Fury and General Ross, who were able to appeal to her latent humanity. She agreed to abandon the Hand, which was in shambles anyway, and act as a member of the Thunderbolts.

Retrieved from "https://marvelcomicsfanon.fandom.com/wiki/Elektra_Natchios_(Earth-101)?oldid=250285"
Community content is available under CC-BY-SA unless otherwise noted.