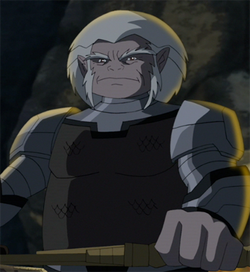 Eitri was the King of the Dwarves who reside in the land Nidavellir. Like most of his people they dwell underground. Eitri is known as one of the greatest of Forgers and weapon makers. Eitri helped create some of the most powerful weapons in all the Nine Worlds. When Thor found himself unworthy of Mjolnir, Eitri loaned Thor the mystical axe Jarnbjorn.

Eitri has an extended lifespan, being well over 1000 years old, and presumably possesses some degree of superhuman strength, durability and resistance to conventional disease.

He is a master forger with supernatural skill at crafting instruments, specially those of uru metal. He is also an able swordsman and has wielded swords and hammers in combat.

Retrieved from "https://marvelcomicsfanon.fandom.com/wiki/Eitri_(Earth-1010)?oldid=167441"
Community content is available under CC-BY-SA unless otherwise noted.