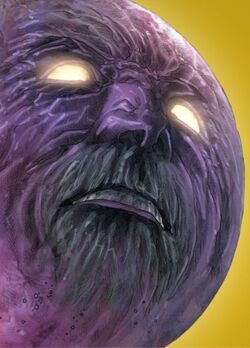 Earth-61615
Base Of Operations
Mobile throughout the universe
Characteristics
Gender

None Cosmic Being, Elder of the Universe and Celestial
Marital Status

I am Ego, the largest, and the most powerful Intelligence in all of Eternity!

Ego the Living Planet, simply known as Ego, was the mysterious hybrid of a Planetary Celestial and an Elder of the Universe, a primordial and extremely powerful being, and the father of the legendary Star-Lord. He originally appeared to be a caring and wise father with a cocky personality, similar to his own son. However, it is later revealed that he is a ruthless entity with a god complex who wishes to conquer the universe through an omnicidal extinction-level plan known as the Expansion, which would have terraformed all other planets via alien seedlings into extensions of himself.

Throughout his million of years in life searching for immortality by trying to conquer the universe, Ego had several countless encounters and rivalries with individuals and groups across the whole universe who attempted to interrupt or even cease his plans, either by accident or for intentional reasons. Several of those individuals were the Ravagers, Nova Corps, Asgardians, Kree, Eternals, Skrulls, Inhumans, even his fellow Celestials and Elders, and a hundred billion more extraterrestrial species and cosmic beings in the entire universe that flourished and/or perished, since the dawn of the age of the universe that he had rivaled against for almost an eternity.

Ego had the plan of conquering the universe by devouring planets and presumably even dwarf stars across the cosmos but was eventually defeated after his rivals became more and more prepared against his attempted invasions overtime. He even once rivaled the mighty Galactus for a short time while trying to devour a solar system, but Ego was almost devoured himself in the process, causing him to never challenge the World Devourer, and he kept his distance from him ever since.

He eventually manages to escape wars with other beings for a long while by deciding to create an humanoid avatar, which was an extension of his consciousness, to explore the galaxy and dwell among other galactic civilizations, as well as learn about these civilizations and proceed with his new plans of the Expansion in the guise of his humanoid form. He would also impregnate women across the universe to achieve a child with the Celestial gene, as the Expansion required two Celestials for the function to flourish, and hired the Ravagers, led by Yondu Udonta, to collect his children for him.

During his time, traveling millions of galaxies in the universe to fulfill the Expansion, Ego had decided to become J'son, the ruler of the planet Spartax, "borrowing" the name from the same original individual he found and met before, and decided to tremendously torture and secretly keep J'Son in his custody as his prisoner on Ego's planet. As an excuse, Ego, now posing as the king of Spartax, decided to leave his throne, giving it to someone else that the original J'son had never trusted. This made the Spartoi Empire eventually crumble to the ground, and its system entirely burned down into social anarchy due to J'son's absence. Overtime, J'son's anger towards Ego grew worse and worse, to the point where he vowed on destroying him permanently, in the most brutal way possible.

On Earth, Ego met and fell in love with Meredith Quill, a woman with whom he fathered a boy she named Peter. His attachment to her was so strong that he visited Earth several times. Eventually Ego realized that if he returned again, his attachment to Meredith would cause him to abandon his plot. To avoid this, he put a cancerous tumor in her brain and left for the last time. He could not bear to set foot on the planet again knowing that Meredith would not be there. When the time came for Yondu to retrieve his son, the Ravager's guilt finally got the better of him and caused him to renege on the deal, keeping the boy himself and leaving Ego to roam the galaxy for years in a fruitless search for Peter.

In between Meredith's death and the Quest for the Orb, Ego took up a new protégé, Mantis, and the two resided on Ego's planetary form. Years later, following the Battle of Xandar, Ego and his ward Mantis came across the cosmic heroes known by many as the Guardians of the Galaxy and was reunited with his Terran son, Peter Quill. Once Ego learned that Quill was the first of his endless count of offspring to inherit his own genes, Ego revealed his true name and identity to Peter and started the Expansion, with a hypnotized Quill.

However, his son managed to snap out of Ego's influence after finding out that Ego killed his mother Meredith, and finally Ego's victory was seized by the Guardians of the Galaxy, with the help of their newest teammates Mantis, Yondu, and Nebula, with the remaining fleet of the Ravagers. In the end, Ego was ultimately destroyed at their hand, ending his chaotic and destructive schemes once and for all. Even before Ego's core collapsed, the real J'son managed to escape the planet using his own helmet and jet boots, and was finally justified after his long-time enemy had perished.

A Change in the Lineage

After the chaotic and confusing events of the event only termed by Deadpool as the "Retconning," an event which made either insignificant or even drastic changes in the history of their universe as a price they were willing to pay by the Deadpool and his allies in order to deal with the aftermath of the Infinity Saga. At the cost of resulting several differences and changes throughout the entire history, and one of those who was or were drastically affected was Ego's entire history. During the current timeline, Ego had a less complicated history due to some altered events caused by their meddling with the reality's space-time.

Everything else was the same for Ego including his historical origins as a Celestial & an Elder of the Universe and his original plan for the Expansion, except for the changes that not only change his destiny, but also changed his "son" Peter and his lineage as well. Ego's real name was later revealed to be Egros, during his revelation. Ego had also never met Meredith, but had only met another unnamed woman on Earth instead and conceived several unnamed children who disappointingly, never had any Celestial genes in them. While Meredith on the other hand, had fallen in love with J'son whose ship had crashed on Earth, making their future son Peter only a Human/Spartoi hybrid in the new retconned reality.

Ego's plan for the Expansion was almost failing, until he made his his own ancient Celestial version of the Ultimate Nullifier in order to use it with his powers once his mission has been fully extracted. Somehow at one point, the weapon had unfortunately been lost throughout the galaxy and was found by a group of cosmic pirates similar to the Ravagers, delivering it on Knowhere to sell on the market, before it was later coincidentally bought by Star-Lord as some kind of "souvenir," as he said himself.

Ego had never killed Meredith, making two individuals of the alien species known as the Badoon take his place, shooting Meredith instead after searching for J'son. Ego still remained to masquerade as J'son to fool Peter and the Guardians into helping him power up Ego using his own version of the Ultimate Nullifier, but still failed after J'son manages to escape his prison with the help of Nebula and Gamora and reveal himself to Peter as his true father. Like his same history, the Guardians and several other allies manages to defeat and destroy Ego, only this time with J'son's help they manage to easily annihilate the Living Planet and stop the Expansion a lot earlier, saving more lives throughout the entire universe.

Moments after the Guardians have seemingly defeated Ego, a small fragment of his core somehow manages to survive his planet's incursion and to started terraforming once again and vowed to destroy the Guardians when he finds them ever again, especially to his son, whom he vowed that he'll be coming for him when the time comes. Unexpectedly out of nowhere, a large cosmic mysterious figure suddenly and immediately lunges behind Ego, revealing to be Galactus himself, who discovers Ego's coordinates.

Ego tried his best and used his strongest powers to defend himself, but he was easily outmatched and was punched by Galactus' enlarged fist, plummeting through to the other side of the planet to the point where Galactus now held Ego's new core. Ego seemed to have finally died after his core was separated from his planet, but he suddenly woke up once more and used all of his tentacles and planetary vines to pull the core and Galactus' arm back into the planet, claiming that Ego will take Galactus with him as his own.

Galactus struggled to pull his arm free, using all his strength and might against the Living Planet and finally squished Ego's core, killing him one last time. All of his core's essence was splattered and scattered into smaller pieces before all of it was converted into consumable energy, and was absorbed into Galactus' cosmic appetite. He was finally devoured by one of his own fears for millions of years, destroying him for the final time and this time, ensuring that his return would be uncertain.

Elder/Celestial Hybrid Physiology: Ego is a Celestial being with vast supernatural and cosmic powers, capable of manipulating matter and energy to create avatars and a planetary shell around his one vulnerability; his core. The living planet Ego has been called a "bioverse." Every part of its substance, including its atmosphere, is "alive" inasmuch as it is animated and controlled by the consciousness of Ego. Just as an Earth organism creates one-celled antibodies to attack foreign substances in its bloodstream, Ego creates humanoid sized anti-body like beings from itself to attack intruders on or beneath its surface. In its encounters with humanoids, Ego has caused the "antibodies" to take semi humanoid form.

Retrieved from "https://marvelcomicsfanon.fandom.com/wiki/Ego_(Earth-61615)?oldid=266100"
Community content is available under CC-BY-SA unless otherwise noted.