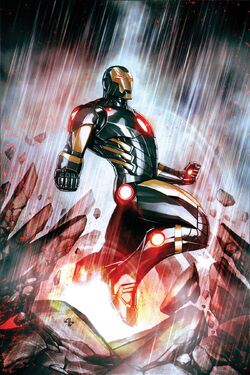 Eddie Stark, Nate Stark, Iron Man Junior, The Hitler/Stalin of Our Time, The Most Terrifying Ruler Of All Time, The Deceiver, The Merchant of Death, Metal Man, The Youngest Dictator, Mad Man, Genocidal Maniac, The "Iron Monger"
Identity

Black
Unusual Features
Has an Arc Reactor implanted in his chest, which maintains his body functions (similar to his father's).
Status
Citizenship

Restoring my grandfather and my mother's legacy is now complete. Hydra is long gone but it will never be forgotten, for it has been reincarnated into this new empire I've created that shall take it's place... HAIL HYDRA and LONG LIVE H.A.M.M.E.R.!!!

Edward Nathaniel Stark was born to parents Tony Stark (the original Iron Man) and Eliza Schmidt, a daughter of the Red Skull, who was in the alias of the name of "Victoria Hand" when he met his father. After revealing that he was the son of the Nazi leader, he had different beliefs when he was growing up with his father (making him more similar to his grandfather), believing that he should've continue his grandfather's legacy and rule the world to make it better, just like the Red Skull would've had done before it was defeated by heroes.

So after his father's death in battle with several reactivated Ultron sentries (in which he was actually the one who reactivated them), he decided to take the mantle of the Iron Man, using it in his own delusional hands and started a tyrant organization known as H.A.M.M.E.R. to resurrect Hydra's legacy and rule the world.

Fight to the Death

Similar to his father's powers and abilities.

Similar to his father's powers and abilities.

Transportation: Stark owns a number of vehicles. Some of them have been modified, such as a Ferrari capable of flight.
Weapons: Similar to his father's weapons.

Retrieved from "https://marvelcomicsfanon.fandom.com/wiki/Edward_Stark_(Earth-61616)?oldid=256264"
Community content is available under CC-BY-SA unless otherwise noted.