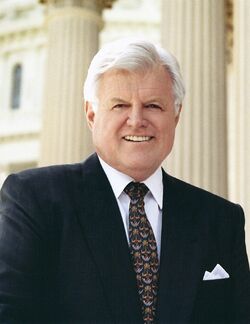 Edward Moore "Ted" Kennedy (February 22, 1932) was a United States Senator from Massachusetts and a member of the Democratic Party. He was the second most senior member of the Senate when he died and was the fourth-longest-serving senator in United States history, having served there for almost 47 years. The most prominent living member of the Kennedy family for many years, he was the last surviving son of Joseph P. Kennedy, Sr. and Rose Kennedy; the youngest brother of President John F. Kennedy and Senator Robert F. Kennedy, both victims of assassination; and the father of Congressman Patrick J. Kennedy.

Kennedy entered the Senate in a November 1962 special election to fill the seat once held by his brother John. He was elected to a full six-year term in 1964 and was reelected seven more times. The Chappaquiddick incident on July 18, 1969, resulted in the death of his automobile passenger, Mary Jo Kopechne. Kennedy pleaded guilty to a charge of leaving the scene of an accident; the incident and its aftermath hindered his chances of ever becoming President of the United States. His one attempt, in the 1980 presidential election, resulted in a Democratic primary campaign loss to incumbent President Jimmy Carter.

Kennedy was known for his charisma and oratorical skills. His 1968 eulogy for his brother Robert and his 1980 rallying cry for modern American liberalism were among his best-known speeches. He became recognized as "The Lion of the Senate" through his long tenure and influence. More than 300 bills that Kennedy and his staff wrote were enacted into law. Unabashedly liberal, Kennedy championed an interventionist government emphasizing economic and social justice, but was also known for working with Republicans to find compromises between senators with disparate views. Kennedy played a major role in passing many laws, including laws addressing immigration, cancer research, health insurance, apartheid, disability discrimination, AIDS care, civil rights, mental health benefits, children's health insurance, education and volunteering. During the 2000s, he led several unsuccessful immigration reform efforts. Over the course of his Senate career and continuing into the Obama administration, Kennedy continued his efforts to enact universal health care, which he called the "cause of my life."

Ted Kennedy has been the center of multiple accidents that should have killed him. However, due to his mutant powers, he continued to survive this different afflictions. Publicly, he died in 2009 but he went to hide in Mutant Town.

Retrieved from "https://marvelcomicsfanon.fandom.com/wiki/Edward_Kennedy_(Earth-1010)?oldid=167232"
Community content is available under CC-BY-SA unless otherwise noted.